Aphasia is a condition a friend of mine, Julie, suffered after she suffered a brain haemorrhage or stroke ten years ago.  Her experience of relearning to speak led me to include aphasia as a condition that affected Princeling George after the Battle of Dimerie. That took place in the Princelings and the Pirates. In book 3, The Princelings and the Lost City, we see him gradually recover.

Today I’d like to share her fund-raising effort with you, and give you the start of the Princelings and the Lost City as a Friday flash excerpt – and let you know it’s my November special offer at Smashwords.

This week, Julie sent me information on a challenge she is doing to raise money for the Tavistock Trust for Aphasia.

I am trying to raise awareness of aphasia and get donations for my Orienteering Control Challenge.

Aphasia is an inability to formulate or understand language, often caused by strokes but any brain trauma and neurological disorder can cause the condition – like Motor Neurone Disease or dementia.

When I had my stroke 10 years ago I was diagnosed with aphasia, though fortunately I could understand what people were saying to me.  But I couldn’t answer them – at all at first.  Over the next few months Pippa (my Speech and Language Therapist) and Ronan worked very hard with me making me speak, read and write again – the way you teach a toddler to do the same.

So to my challenge: for a month I’m trying to find 120 control flags (1 for each month of the 10 years) and currently I’m halfway through the month.  I have found 61 controls already, in glorious sunshine in Godalming and Northaw on the 20 & 21 October, and on Sunday 28th in the cold and rainy environs of Knole Park, Sevenoaks.

Life without language is a little frightening and a lot frustrating – I know that now – so any donations, however small would be welcome to my chosen charity, the Tavistock Trust for Aphasia, whose work aids research into the condition and whose grants help people who have lost their voices.

Thanks so much and the details of my challenge are below.

Please see the details of Julie’s Orienteering Challenge on this link: https://mydonate.bt.com/fundraisers/juliecleary 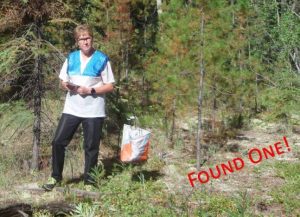 I met Julie through orienteering.  It’s a lovely sport in which you get a map to help you find your way between control points – simple flags where you check in automatically to show you’ve found the spot.  Originally developed in Scandinavia, the classic form takes place in wildernesses and forests. Unlike the common perception, orienteering courses aren’t that long – at my age they are less than 5 km.  When I was young and fit the longest one I did was 10km.  The longest I was out was for 2.5 hours. (I got seriously lost that day).  A good race would take me about 60 mins.

These days there are competition types that vary from half hour ‘sprint’ events in parks and cities, through middle distance races in smaller forests and we still have the classic distance races.  Mountain marathons are similar, but the mountain and marathon bits tend to dominate.

The best thing is, although it’s a time trial, you compete at your own pace. Navigation can beat sheer speed.  If you’re not fit, it’s a great way of taking exercise in the great outdoors with a bit of mental stimulation at the same time.

Julie, by the way, is a former Irish International orienteer 🙂

As I said, I let George have a speech problem at the start of Princelings and the Lost City.  It was hard to type, and extremely hard to edit!!  As with Julie, it had no effect on his intellect; he just had to learn how to form words again.  Hence the stumbling over framing words and mixing up how to pronounce certain letters.

I’ve put The Princelings and the Lost City on special offer at Smashwords this month.  I may upload a revision during the month to include a word about the Tavistock Trust for Aphasia as well.  Find the book here.  Fred and George are the Princelings of the East, of course. And now… the start of the first chapter…. 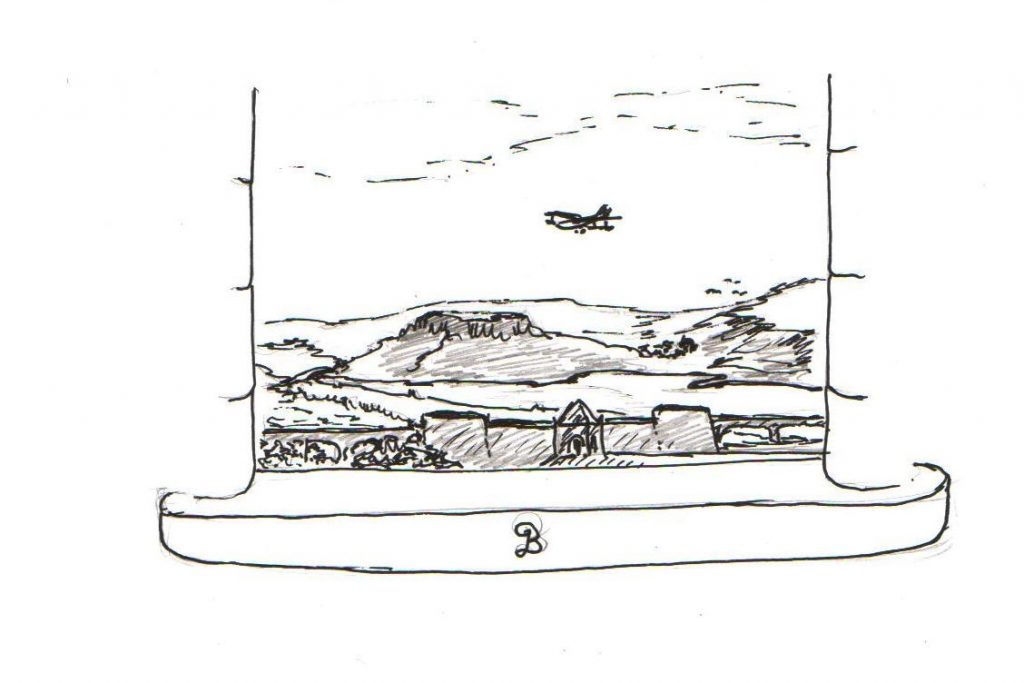 Fred gazed out of the window along the road to Powell. It wasn’t his normal window and it wasn’t his normal gaze: instead of Thinking, he was Watching, and watching impatiently too. Beside him, also watching, but in a state of contained excitement, was his brother George.

Princess Kira was arriving shortly. She had told them that her brother would be driving a new type of carriage, and that they would arrive on the straight stretch of road approaching the castle, and would they please warn everyone that they might need to stand aside if the carriage wasn’t completely under control. Fred hadn’t the faintest idea what she meant by that, and was worried for her safety. George had a very slight inkling about it, as he had been reading his engineering newspapers, and was worried that the new carriage might not be in sufficiently good condition afterwards for him to take a really good look at it.

“Where are they?” said Fred craning his neck to see further down the road, then pulling back to look at George, then looking out again. “They should be here by now.”

“It’sh er-bnot .. threeyet.” George was speaking very slowly and trying hard to enunciate clearly. A head injury the previous year meant he had to learn how to speak again. Some sounds got mixed up, and some were easier to say if you ran them together, but most people understood him these days as long as they had the patience to wait and listen to him.

“I know,” said Fred, as if it was George’s fault time was dragging, and he got up and paced the room for a bit. It wasn’t a big room, so that involved a lot of turning, unlike their apartment on the northwest side of the castle. That had both space and a great view of the mountains and the vale stretching away into the distance.

Princess Kira was arriving in advance of the wedding party. On Midsummer’s Day, Prince Lupin (King of Buckmore) was to wed Princess Nerys of Dimerie, Kira’s elder sister. The rest of the wedding party, guests, and hangers-on would arrive starting the day after tomorrow, in waves of about six carriages a day for three days. In order to give their guests appropriate honour and comfort, a number of Buckmore residents had given up their normal apartments. Fred and George had offered theirs to the princesses, so they were now standing in the small room they had been allocated, but they also had George’s laboratory if they needed more space. No one would dream of venturing into George’s laboratory. It was a regular source of unnatural smells, noises, and small explosions.

A strange noise crept into their consciousness, a sort of buzzing. It changed tone, skipped a beat and sometimes stopped altogether for a few seconds. The princelings looked out, straining to see what was making the noise. Fred stared down the road as far as the bridge; George gazed up into the sky as if he was dreaming.

“There ….there..they..ther….” he stuttered and pointed for Fred to locate.

“What?” said Fred, following the direction and wondering why he was pointing into the sky. There was some sort of bird flying towards them.

“I w-wond-ered … a ffly-ing ma-ma-sheen.” In his excitement, George was having trouble getting any words out at all. He slipped off the window seat and went over to a pile of papers beside his bed. He selected one near the top of the pile and brought it back to Fred.

Fred glanced at it, held it close to look at the machine in more detail and dropped the paper to look at the sky. A very similar machine was now approaching the last stretch of road before it turned to come into the castle itself.

The flying machine was losing height and heading straight for the road. People scattered into the fields on each side, shading their eyes and screaming in fear and wonder at the new invention.

Suddenly the sound stopped. The machine floated forward a few feet above the ground. The wheels underneath it touched the ground. It bounced once, twice, then on the third time it settled and ran along the road, rocking from side to side as it hit ruts and stony bits. It rolled to a standstill as the road widened and became a nice large paved square in front of the castle gateway.

Read the rest with a 50% discount at Smashwords throughout November: The Princelings and the Lost City

Or you could just get the initial three Princelings books in the first Princelings Box Set.

Aphasia and a Friday Flash Excerpt

4 thoughts on “Aphasia and a Friday Flash Excerpt”