Ivon releases this week, and I would like to thank the RedDoor Publishing and NetGalley for the ARC.  The blurb intrigued me! 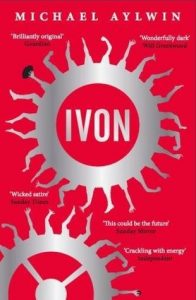 The year is 2144, and the world is powered by sport – politically and practically. Each community owes its prosperity or otherwise to the success of its teams and athletes. A person’s class is determined by their aptitude for sport. Once their useful life as an athlete has expired, they are placed in stasis at an age predetermined by that class.

But not in Wales.

Separated from the rest of the world by a huge wall, the Welsh still play games for joy. They play, they carouse, they love, they die. They have fun.

Of all the Welsh, the greatest sportsman is an unreconstructed genius called Ivon. When the chance arises to become the first Welshman to cross the great divide into England, he cannot resist. His parents, exiled from England before he was born, know what London will do to him. They are desperate to have him back. But London will not give up an asset like Ivon so easily.

Ivon is a celebration of where sport has come from and a satire on where it is going.

This is as much Dusty Noble’s story as Ivon’s.  Dusty seems to be the main protagonist; newly retired from elite sport, a cricketer, a batsman. He’s interested in other sports, but you can only play one.  Specialism is the key to efficiency.  If you play well, and win, the  population of London will release more energy. That’s how they power the city.  Well, that appears to be how it works.  It’s certainly the case that everyone is expected to retire to the energy chambers with the partner of their appointment, to release as much energy as possible for it to be stored and used to run the place and produce the food they eat.  So, no energy stored, and you’re on reduced rations.  It seems to be a joyless place, every model citizen wholly focused on being as efficient and productive as possible.

It all functions well enough.  Until Dusty, in the spirit of using up the travel credits he has accrued, takes a trip to the Other Side, through the border fences to Wales, where they do not subscribe to the modern era.  They are savages in fact, living in homes, many people in one home, visiting each other, drinking alcohol, playing rugby undirected by computer strategists, and even playing cricket and football too.  The same person playing more than one sport! Incredible!  And the shining star, with skill Dusty has never seen before, is Ivon.  Think what Ivon could do for London.  And Ivon wants to see what London could do for him….

Michael Aylward has produced a brilliantly logical world, totally internally consistent, with several humorous or snide situations depending on your view of the state of sport (and the nation).  Ivon is a little like the Stranger in a Strange Land, or Tommy for that matter, and most of the time I’m wondering whether it will all end happily or not.  There are a few lulls in the writing, and I got distracted for a time over the in-jokes about certain real cricketers now retired, but once over the middle part, I was swept on again to the conclusion.

It’s funny, it’s moving, it’s jaw-droppingly horrible if you want a future with any real expression of personality and self-determination. But it’s an excellent contribution to the possibilities of the future we seem to be bringing on ourselves. It might get a bit boring for people who don’t like sport in any form, but you don’t need to like rugby or cricket to enjoy the characters and the tale to the full.