Fluency has been in my Kindle for at least two years.  It’s one of those I got on a freebie, and kept meaning to read and review.  Well, it’s finally off my TBR (and ticked off my reading challenge list).  Huge apologies to Jennifer Foehner Wells for taking so much time, but here, at last, is the review. 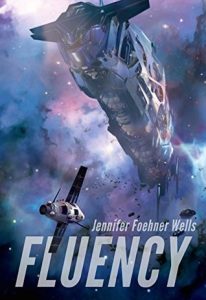 NASA discovered the alien ship lurking in the asteroid belt in the 1960s. They kept the Target under intense surveillance for decades, letting the public believe they were exploring the solar system, while they worked feverishly to refine the technology needed to reach it.

The ship itself remained silent, drifting.

Dr. Jane Holloway is content documenting nearly-extinct languages and had never contemplated becoming an astronaut. But when NASA recruits her to join a team of military scientists for an expedition to the Target, it’s an adventure she can’t refuse.

The ship isn’t vacant, as they presumed.

A disembodied voice rumbles inside Jane’s head, “You are home.”

Jane fights the growing doubts of her colleagues as she attempts to decipher what the alien wants from her. As the derelict ship devolves into chaos and the crew gets cut off from their escape route, Jane must decide if she can trust the alien’s help to survive. [goodreads]

There are lots of really, really good things about this book: the world-building, the complexity, the plot, the aliens…  The ingenuity of the alien ship and the way the lifeform aboard messes with her head (and therefore ours) makes for exciting reading.

There are also some things I liked less, like the somewhat wayward depiction of the group of astronauts selected for the mission.  I couldn’t decide whether to call them stereotypes or just ‘would NASA really not weed these people out?’  But then, with the sort of people appointed to positions of power these days, and the possibility that NASA actually wants to the mission to fail, well, I suppose you can just about get away with them.  They do make for a lot of inter-personnel (deliberate) tension, and they certainly have very different objectives from each other.  Jane, being a civilian, is allowed to have different objectives, of course.

The basis of the communication between the alien and Jane is a form of telepathy. That leads to some interesting scenes, where eventually you wonder what is real and what is not. There are some very icky mammoth man-corroding slugs which appear to be real. As I said, the world building (and the alien science & technology) is very well done. Some reviews have hammered the writing, but I didn’t notice anything too clichéd (apart from the whole set-up).

Fluency is an excellent story, with some ingenious twists on the ‘what really happened at Roswell’ theme.  In the end it leads to a series.  I’m not sure I’m sufficiently sold on Jane’s adventure to continue it, but I do recommend the books to others who wonder what those little green men might turn out to be.