Alexandria (#19) and Nemesis (#20) wrap up the fabulous crime series set in Rome (and other Roman territories) starring Marcus Didius Falco.  Falco is an agreeable cove, with a murky past and one of the best female protagonists around as his wife.

I’ve followed this character all over the Roman Empire from the mines of Britannia, through the deserts of Palmyra, across the water to Alexandria, and down all the sleazy muck-ridden alleys of Rome. I started in the early 1990s, so after 25 plus years it’s hard to say goodbye.

Fortunately, Lindsey Davis couldn’t really say goodbye either. She started Falco’s adopted daughter (from one of the Britannia adventures) off on her own career as an investigator.  Flavia Alba already has six adventures in print, and I read books 2 and 3 a few weeks ago.

So here, to complete one of my ‘finishing the series’ challenges, to raise the level of my Cloak and Dagger series, as well as adding to my climb up my TBR mountain, is a summary of the last two Falco books. 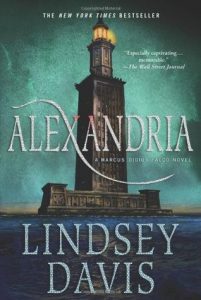 In first century A.D. Rome, during the reign of Vespasian, Marcus Didius Falco works as a private “informer,” often for the emperor, ferreting out hidden truths and bringing villains to ground. But even informers take vacations with their wives, so in A.D. 77, Falco and his wife, Helena Justina, with others in tow, travel to Alexandria, Egypt.

But they aren’t there long before Falco finds himself in the midst of nefarious doings—when the Librarian of the great library is found dead, under suspicious circumstances. Falco quickly finds himself on the trail of dodgy doings, malfeasance, deadly professional rivalry, more bodies and the lowest of the low—book thieves! As the bodies pile up, it’s up to Falco to untangle this horrible mess and restore order to a disordered universe. [goodreads]

This was a new destination for Falco and family (and lovely to see young Alba beginning to get into character!). The plot was tortuous as usual, but I did drift off occasionally – I think I found the third party narrative of what witnesses said a little tedious.

Any trip abroad for Falco and family is fraught with incident, and even though Falco thinks he’s got away from some of his more obnoxious relatives, they turn up to sponge off him again.  But then, they have their uses in uncovering some of the more tortuous parts of the plot.

I enjoyed this trip to Alexandria, with the mythical library and the fabulous lighthouse.  All meeting Lindsey Davis’s high standards for recreating the ancient world and bringing it to life in the hands of the master informer, Falco. 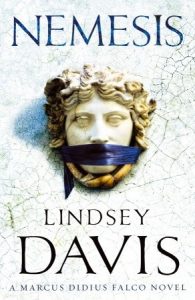 In the high summer of 77AD, Roman informer Marcus Didius Falco is beset by personal problems. Newly bereaved and facing unexpected upheavals in his life, it is a relief for him to consider someone else’s misfortunes. A middle-aged couple who supplied statues to his father, Geminus, have disappeared in mysterious circumstances. They had an old feud with a bunch of notorious freedmen, the Claudii, who live rough in the pestilential Pontine Marshes, terrorising the neighbourhood.

When a mutilated corpse turns up near Rome, Falco and his vigiles friend Petronius investigate, even though it means travelling in the dread marshes. But just as they are making progress, the Chief Spy, Anacrites, snatches their case away from them. As his rivalry with Falco escalates, he makes false overtures of friendship, but fails to cover up the fact that the violent Claudii have acquired corrupt protection at the highest level. Making further enquiries after they have been warned off can only be dangerous – but when did that stop Falco and Petronius?

Egged on by the slippery bureaucrats who hate Anacrites, the dogged friends dig deeper while a psychotic killer keeps taking more victims, and the shocking truth creeps closer and closer to home… [goodreads]

Nemesis starts sadly, and carries a feeling of doom and inevitability through it like a cloud.  For all that, it is one of the best Falco stories.  There are plenty of old friends involved, there are family concerns. Nux the dog lightens things with impertinent begging. Falco is beset with worries on all sides, and a pretty tangle of lies to sort through. Old problems like Anacrites rear his ugly head, as well as double dealing provincials.

I couldn’t work out whether the crimes really were more gorey than previous book. Am I becoming more sensitive to them? Was it just the feeling of dread that came through: these are particularly nasty crimes, and all fit the title Nemesis.  Elements in this book are far darker than anything Falco has previously been involved with. Even more shocking are the identities of those who carry out some brutal deeds. Lindsey Davis has left no holds barred on Falco’s final story, indeed, gives him some very good and powerful reasons to retire.

I wish him a happy retirement, and indeed, we have already seen him in that role in Flavia Alba’s books.  I’ll miss him, though.  I may even have to buy the early books so I can reread them – and to make up the set.  Then again, re-reading is sometimes something one shouldn’t do with a much-loved series.  Farewell, Falco, or should I say ‘Vale’.

4 thoughts on “Book Review | The Falco Finale – Alexandria and Nemesis”