Another roundup! Some quickies to round off four more books I read and hadn’t reviewed…  two library spur-of-the-moment choices and two that have been sitting in my kindle for a while – four years each.  I don’t like doing them as a roundup as each of these deserves a page of its own, but still… at least it’s got a review. 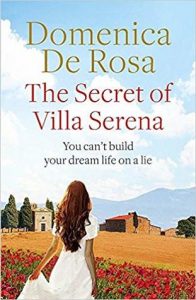 Brief blurb: Emily Robertson looks like the woman who has it all: the lovingly restored Tuscan farmhouse, the three beautiful children, the successful, attentive husband. But when her husband dumps her by text message, she has to face up to some stark home truths. How will Emily cope, stranded in the countryside with no man, no money, dodgy phrasebook Italian and a psychotic cleaner?

My thoughts: At first I felt it was too twee, a nice romance in a gorgeous setting.  Then it snuck in some jarring overtones. I realised the weekly column Emily was writing, sickly sweet envy-inducing life in Tuscany for readers in the UK, was a lie.  The secrets started emerging, some scary moments ensued.  I managed to keep track of most of the characters, although mixed up Emily’s best friend with her daughter on several occasions.  As usual, I got carried away and ended up reading half the book on a binge read. I couldn’t put it down.  Domenica de Rosa is the real name of one of my favourite authors, and this shows why she’s a favourite!

I recommended it to my bookclub too, and I’ll be interested to see what they thought of it, next week.

My Barsetshire Diary by David Prosser 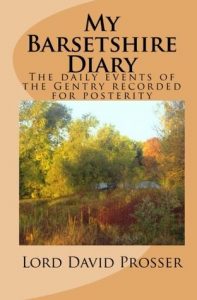 Brief blurb: A fictitious look at Lord David’s day as a member of the Gentry living in a samll village. Come and meet the villagers like Mellors the gardener with a past and Grizelda the housekeeper. Join us at the village fete where Edna is determined to win the jam making competition at any price. [fix that typo at Goodreads, David!]

My thoughts: It’s been far too long since I got hold of this gem. Having read the follow-up first, I felt it important to catch up with Lord David before the year was out.  This introduces his rise to lordship (I think that occurred at the start of the second book too, but who cares?), and encourages you to enjoy the daftness of English country life.  The author manages to turn the mundane into marvel, the humdrum into the humongous.  It was great fun – but I prefer the second, which is a definite must read! 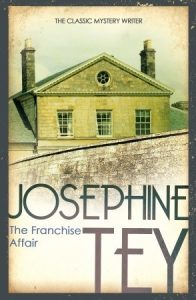 Brief blurb: Robert Blair was about to knock off from a slow day at his law firm when the phone rang. It was Marion Sharpe on the line, a local woman of quiet disposition who lived with her mother at their decrepit country house, The Franchise. It appeared that she was in some serious trouble: Miss Sharpe and her mother were accused of brutally kidnapping a demure young woman…

My thoughts: Had a little misunderstanding with the audiobook player which meant I missed little bits of the early chapters. However it was a slow but descriptive start, and I only really missed atmosphere.
Loved the story, and got really into it, so had to sit down and listen to the rest of it as priority once I got home from my long drive. No murders but plenty of puzzle and rooting for the accused! Nice to look at crime from the perspective of a family solicitor for a change.  The style reminds me of the 1950s, but it could be earlier.
The reader, Carole Boyd, was very good and mostly made the character voices very distinctive. I appreciated her clear enunciation.
I may well add more Josephine Tey books to my list! 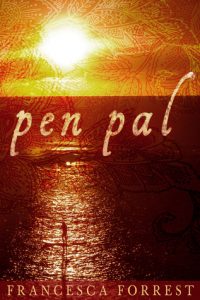 Brief blurb: Em is a twelve-year-old girl in a floating community off the Gulf Coast. Kaya is a political activist in a terrifying prison. They are pen pals. Em’s wistful message in a bottle finds its way to Kaya, imprisoned above the molten lava of the Ruby Lake. Both are living precarious lives, at the mercy of societal, natural, and perhaps supernatural forces beyond their control.

My thoughts: At first I wasn’t sure I wanted to continue with it: I couldn’t relate to Em’s situation, and Kaya’s was just beyond the bounds of possibility, wasn’t it?  But the stories each told about her life, and the exchange of letters began to hook me in, and I needed to read on, especially when Kaya’s situation began to get truly desperate.  Full marks to the author for a brave and imaginative take on minority issues and political turmoil.  I think it fits into YA rather than MG, but it’s good for any adult with a limited grasp of what it might be like to be a minority ethnic group with more right to be there than the government.  The politicking surrounding Kaya is brilliantly tied up in knots. An excellent mix of myths, legends, geology and worldliness.

Click the cover for the books in this roundup to go to its Goodreads page.