Children of Time was January’s Book of the Month for the Space Opera Group on Goodreads.  It sounded really interesting, and since I’d finished my own series for the time being, I hoped to read some scifi for a change without too much danger of having my ideas contaminated by other people’s better ones! 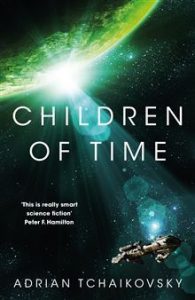 (first of Children of Time series )

A race for survival among the stars… Humanity’s last survivors escaped earth’s ruins to find a new home. But when they find it, can their desperation overcome its dangers?

WHO WILL INHERIT THIS NEW EARTH?

The last remnants of the human race left a dying Earth, desperate to find a new home among the stars. Following in the footsteps of their ancestors, they discover the greatest treasure of the past age – a world terraformed and prepared for human life.

But all is not right in this new Eden. In the long years since the planet was abandoned, the work of its architects has borne disastrous fruit. The planet is not waiting for them, pristine and unoccupied. New masters have turned it from a refuge into mankind’s worst nightmare.

Now two civilizations are on a collision course, both testing the boundaries of what they will do to survive. As the fate of humanity hangs in the balance, who are the true heirs of this new Earth? [goodreads]

This is an interesting story, with definite phases of development, since someone is world-forming other planets while the people on earth are destroying it (and themselves).

Some remnant ships set out with whole communities in deep sleep until they find a world they can resettle.

Since that scenario happens in my own books as well as many others set in future space, I don’t think I’ve a problem with that. But the first part of this book seemed really familiar to me. I had a definite feeling of deja vu, and wondered if I’d read an early version in an anthology or something, before I started using Goodreads.

Once I got onto parts I definitely hadn’t read, I found a good and interesting story – the logical development on the world beneath, the challenges undertaken by the enhanced creatures. Interesting how the ‘human’ gene had affected different types of creature, and the path of that evolution was a brilliant piece of work by the author. If you’ve read other reviews, you’ll know it’s spiders. I think spiders are excellent and intelligent creatures.

Unfortunately the humans who have been left in the spaceship that come seeking a home are not. I got bored with their bickering. My desire to read on dwindled, until I decided that my first book of the year was going to be abandoned. There is only so much reading time, and many, many other books on my list.

And then I wondered whether I had actually started this book before, and reached the same conclusion earlier. There is no record of it, but it’s an alternative explanation.

I’ve read a third of it, but I won’t award stars because it’s obviously just not rocking my boat. Other people love it.

I have included Children of Time as my first book in the SpaceTime Reading Challenge, though.

2 thoughts on “Book Review | Children of Time by Adrian Tchaikovsky”