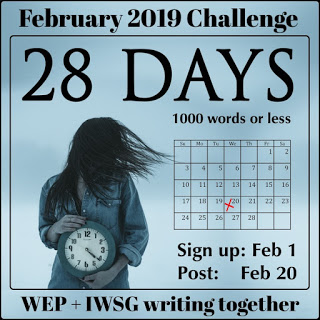 28 days, the title for February, went around my brain for a few circuits before I got two strands of inspiration.  The suggestions from the WEP team when announcing the prompt covered so many angles it was hard to find something they hadn’t suggested… just saying, folks!

The assumptions made about climate change impacts on Iceland are entirely my own and not based on any formal research. Air quality in general is a different matter.

I’m happy for any sort of comments, but 28 Days is very much an experimental piece, so a full review would probably be inappropriate! It’s 996 words.

It sure is a strange place. Reyki, the capital, is just a few buildings on connected islands, with a weird opera house sunken in the bay. You go in like onto a ship, but it’s great inside.  The other main building, the cathedral, is in the centre of one of the islands and it’s real pretty.

The open air is unbreathable, even though it’s supposed to be free of smog. I just coughed and coughed when I took my mask off, so I put it back on.  We went to the ‘famous blue lagoon’.  It’s a tidal pool with hot water springs heating the sea.  Really great, but the stench, even through the mask… well, you wouldn’t want to know.  Worse than when the tank overflowed.

Anyway, we’re setting off tomorrow.  The other people seem okay. One guy has had to turn back, though.  Wheezing all the time. The medics took him away. I’m fine though. I just keep my mask on.

I only have a limited number of vcredits, so it’ll be a week till I next check in.

Yes, I’m here in the land of ice and fire.  Haven’t seen any ice yet, but cripes, the fire is scary.

The first place we visited was the old parliament area, the Thingvellir they call it.  Just a place of rocks and a flat valley and lake.  But the rock sort of formed a trail, with walls either side. It had pools alongside, steaming with hot water, and a waterfall rushed down into one of them with bubbles and foam and everything. Our guide told us to be careful, the water would give us terrible burns, it’s so hot.

Well of course there has to be someone dumb on every trip, and wouldn’t you know it, two of the young guys at the back decided to go skinny dipping that night. I didn’t hear them go out, but we heard the yells and screams as the heli-med shipped them out.

We have a new guide now, Ovar. He just said the other guy had a new group and Ovar takes the trek part. You know what I think? I think they replaced him for letting those guys get hurt. They weren’t nice guys, but they don’t deserve to get hurt, do they?

Anyway, I’ve teamed up with a nice couple and another woman who’s a bit stern. But nice enough. She reminds me of that cop I dated. God, I hope she’s not a cop! I’ll spy on her and find out.

We’re already two weeks into the trip. It’s really nice. The food is good and the scenery wonderful. My feet hurt from the trekking, but you know, I said I needed a challenge, and it’s a good challenge. I’m doing fine, don’t you worry about anything. This message is short cos I want to check in with Paulette and Mikey.

Well, it’s a grand place but it’s tough here. The ground shakes occasionally. Ovar says not to worry, it’s the rift valley just having a little movement. Perfectly normal.  But we could see the glows in the night over towards the east. We asked Ovar in the morning and he said there was a little eruption near the old glacier field, only small, not to worry. We were ‘quite safe’.  I asked how ‘quite’ that was and he laughed and said ‘perfectly’.  I think Icelanders talk English like Brits, not like us.

We are camping on what used to be a glacier. It’s just rock now, but you can see deep scrapes where the ice used to move down the rock. My online geology course is really paying off!

We go across to the north side of the island tomorrow.  Ovar says it will be very different there. Not sure why, but still.

There’s a cop on this trip and I don’t know whether she knows, or what. Just keep your head down. Don’t say anything about me, or my trip to Iceland. I’ll get through this 28 days if it kills me.

Vcards to Mom and Paulette (transcripts)

I’m looking forward to the end of this trip. I can just about breathe the open air now; I’ve got used to it. The weather has turned cold and foggy.  It’s because we’re on the north side of the island where the warm current doesn’t reach any more.  I even saw some ice the other day.

Having a great time!

For god’s sake don’t let Mom see this or know what I’m telling you. I’ve just told her all’s well. But it’s not.

[pause while she checks over her shoulder, bites her lip and rubs her hands over her face]

What should I say?

We camped on the edge of a lava field, an old lava field, from the volcano that erupted way back in 2019. Ore-something, all these names are so long like lama-lama-dingdong. There was an earthquake, and our gear slid into a crevasse that opened up. We were hanging onto our things in the tent, hanging on to each other, everything.  And then the smell!  We went for our masks, but we’d put them in our packs, and the packs had gone with the rest of the gear. Ovar got us to huddle together, wrapped us in an orange tent, and set the emergency beacon. Good thing we were all fully clothed against the cold. But everything else…

We’ve only got two more days of the trip left. [screws up face and wipes eyes]