Dining out with the Gas Giants is the third in a wonderful series by Clare O’Beara. I started with the second, loved it, and added the first one last year. I don’t think there’s any problem with that approach. The series is set in a future London, with all the problems we are storing up for ourselves taken on to a logical result. Except for Brexit. With any luck it’ll never happen.

The Gas Giants is the name astronomy folks give to Jupiter and Saturn, giant planets made mostly of gas.

Dining Out with the Gas Giants

(Dining Out around the Solar System #3) 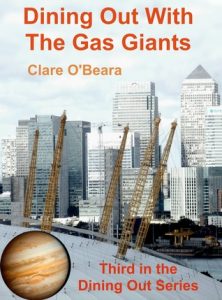 COFFEE CRISIS – IMPORTS FROM MERCURY
Donal and Myron are journalists who’ll go anywhere for a story. This summer, as tempers flare and riots are sparked in London’s heat, they get a lead they can’t resist.
STUDENTS VS DRONES
Not all the off-world immigrants are friendly. For every gas giant native who works in ballet or hospitality, there’s one who plots a takeover.
RIOT AT THE DOME
Place hacking, augmented reality and student protests are all in a day’s work for the London’s Eye reporters. But when the trail leads to Rio and the Argentine Andes, have they finally bitten off a story too big to chew?
LONDON SKYBRIDGE IS FALLING DOWN

This is a standalone novel within the series Dining Out Around The Solar System. [goodreads]

I’m very fond of Donal and Myron. Donal is an Irish citizen in London, brilliant and hypersensitive in many physical ways, as well as emotional ones. Myron is a laid back BritishJamaicanAfrican with a large family network, most of whom don’t intrude much. Together they are a crack journalistic team working on the London’s Eye, from an office on the Thames in the Canary Wharf area of East London. It’s a modern, fast-moving world, where ‘alien’ is a racist term and people are getting overheated about aliens taking their jobs. Students are getting overheated about nobody having jobs to give them so they end up deep in debt. And everybody is getting overheated because, well, you know, climate change.

Ms O’Beara takes us with them through their humdrum lives, picking up leads here, ideas there, and gallivanting over roof tops and into private property long abandoned in search of a story. It’s a pattern regular readers are familiar with, but for a long time it seems like the story is going nowhere, just a series of vignettes that demonstrate what a really, really clever world Ms O’Beara has built. And seriously, the level of detail, and the depth of the sociological, psychological and environmental science that’s gone into this is terrific. And it’s in London. A totally believable, both historic and futuristic London. With all its problems. And a mining shuttle and import/export arrangement from the other planets that’s taken over Stansted.

This is home. I feel totally at ease with it, even with the strange denizens of the other planets who have come to make their livings here. The only problem was that for two-thirds of the book nothing much happens. We go everywhere with Donal and Myron, we meet a lot of people, uncover a lot of small stories, and we wonder whether anything is going to happen. It does, of course. That is the style of these books. All these things that the journo pair have been working on come together in the most bizarre way, and all that has gone before makes sense.

But I did get extra itchy with this one. I know I’d felt the same about the first one, which I read last year. I think the second one is shorter, and possibly has a more compelling main theme. But having got to that two-thirds point, it all starts to unravel, all the dangerous stuff happens, and it’s nearly midnight and I ought to go to bed. So I update my Goodreads progress on the book. I go to bed… and just have to finish it off!

It’s addictive, compelling, and probably the best put-together future world in existence. With added cute and blobby aliens, and great gadgets. And Jovians in the Dome. What’s not to like?