A Man Called Ove was my (physical) bookclub’s read for February. I’d heard of it, and thought it was on my TBR, but it wasn’t. Maybe I’d rejected it after going down the TBR hole once upon a time. 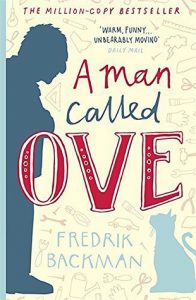 A grumpy yet loveable man finds his solitary world turned on its head when a boisterous young family moves in next door.

Meet Ove. He’s a curmudgeon, the kind of man who points at people he dislikes as if they were burglars caught outside his bedroom window. He has staunch principles, strict routines, and a short fuse. People call him the bitter neighbor from hell, but must Ove be bitter just because he doesn’t walk around with a smile plastered to his face all the time?

Behind the cranky exterior there is a story and a sadness…. [goodreads]

Ove is an old man in a housing development somewhere in Sweden, who dislikes most of his neighbours. Especially the new ones, who are incapable of reversing a trailer even in an area clearly marked ‘no cars to be driven in this area’.  Yet they manage to get him to help them do things he couldn’t imagine himself doing.  Besides, he has other things on his mind.  Mainly his wife, who has done the unthinkable: died before him.

Fredrik Backman and his translator make a wonderful job of unveiling Ove’s past, explaining all the reasons his character is what it is.  It’s the minutiae that appeals to Ove, not the big picture, so there’s a great deal of detail in his way of life. Some of it seems predictable, and some is simply an insight into another world.  Ove is not of the world of wifi and iPads.  His world is engines, which he can take apart and reassemble. He would have been doing this on the railways for years had his code of conduct not put him at a singular disadvantage.  Fortunately, the trust of ages long gone meant he was employed in another capacity, one where this code would not be tested.

As we follow Ove through his life, we are also treated to the confrontations with progress he has at all levels.

Unfortunately I felt uncomfortable revisiting his sad past, not finding the humour that other readers find.  It has happened in other stories and films, where others laugh at things I find unbelievably poignant.  Finally, having skipped a few chapters along the way, I found a satisfactorily twee finale, followed by some reading questions (I hope my bookclub isn’t going to ask them).  A very fine quiz asked ‘How Ove Are You?’  Naturally, it turned out I am very like him—8 out of 10, in fact. It really isn’t funny. It’s sad.

You may enjoy Ove.  There’s a lot of similarity in tone between this and the Hundred Year Old Man who Jumped out of the Window and Disappeared, which I loved for its hugely entertaining take on European, or even world, history.  There’s no light relief for me in Ove. I’m too like him. Including my war with cats in my garden. Join the Eeyore club.