Boy X sang to me from the teen shelf of my library bus. I thought of all those years I miss the letter X off my Alphabet reading challenge.  As I walked home with it, I realised I’m not doing titles this year, but authors. And I’ve already got a Smith!  Never mind, it gives me a green cover for my Colour Coded Challenge, and a book towards my Great Middle Grade Reads challenge. 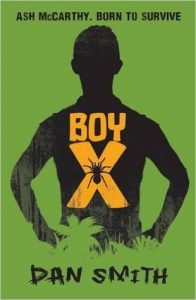 Kidnapped and drugged, Ash wakes up on a remote tropical island. His mum – a genetic scientist – has been imprisoned and infected with a deadly virus. Where is he, and what’s he doing there? He sets out to cross the jungle to find out and rescue his mother. Soon he realises he’s quicker and sharper than before. But there’s something else …why are the animals watching him, and how can he use the jungle to his advantage? [goodreads]

This was a mercifully quick read (after Revelation Space). As the blurb says, we meet Ash on a tropical island. We also discover he’s raw from the recent death of his dad, and mum seemed curiously reticent about the circumstances.  Of course, he thinks it’s all his fault.

A helicopter crashes into the strange Biosphere he’s in, and shuts it off from the outside world. Running from people who seem to mean him harm, Ash finds his way into the lab. He notices his senses are strangely enhanced… His feet, which he cuts on broken glass, heal within a few hours.

Fortunately, he finds a companion his own age who is looking for her father. They join forces to track down the only people who can help them, before someone else sinister tracks them down to stop them.

By now you understand that everyone who said this is an exciting adventure is right. Yet I found the language stilted at first; was I reacting to my previous read? The writing is pacy, often by using very short sentences. I think an author must strike a balance between short sentences for easy reading and just short sentences.

Later I think the easy reading element gets lost in the adventure. That twists, and turns, and then throws in a double loop back.  But early on, the author injects plenty of detailed description of the jungle, its dangers, and the smells which assail Ash until he learns how to use his enhanced senses.  Unfortunately, I found much of this description clunky, sometimes repetitious, and with plenty of clichés I wanted to crawl away from (although the spiders and ants were excellent). ‘The sound of a babbling stream chattered somewhere out of sight.’ Babble versus chatter, discuss. Yuk.

There’s quite a lot of violence at the end, with the kids fighting the grown-ups with highly offensive weapons. This might have some people twitching – but they’re baddies, so I suppose it’s all right?

Overall it’s a good adventure, plenty for both boys and girls to identify with, and un poco español to learn. A refreshing read.

Boy X, by Dan Smith 'a good adventure, plenty for both boys and girls to identify with, and un poco español to learn. A refreshing read' #mg #adventure Click To Tweet
Book Review | Boy X by Dan Smith

One thought on “Book Review | Boy X by Dan Smith”