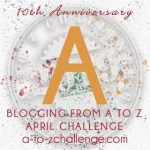 April A to Z Challenge starts today—and it’s ten years old! Happy anniversary to everyone involved and especially Lee, who started it all.

I’m celebrating by revisiting posts from the last seven years. Yes, I’ve done seven April A to Z Challenges before this one! I checked out my favourites for each letter, then tried to spread the final choices over the years. I needed some sort of alignment with my usual blog content, though. If you come back outside of April, you should get something along the same lines of these posts.

I decided to kick off with a post from April A to Z 2017. This started on a Saturday, which is my normal book review day. When I read this book I had taken on a rather important voluntary role. I found several of the concepts about teamwork, and the detailed preparation for being an astronaut, really helped me survive this role—which I’ve just finished.  I survived! 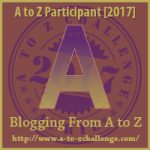 An Astronaut’s Guide to Life on Earth

Colonel Chris Hadfield has spent decades training as an astronaut and has logged nearly 4000 hours in space. During this time he has broken into a Space Station with a Swiss army knife, disposed of a live snake while piloting a plane, and been temporarily blinded while clinging to the exterior of an orbiting spacecraft. The secret to Col. Hadfield’s success – and survival – is an unconventional philosophy he learned at NASA: prepare for the worst – and enjoy every moment of it….

You might never be able to build a robot, pilot a spacecraft, make a music video or perform basic surgery in zero gravity like Col. Hadfield. But his vivid and refreshing insights will teach you how to think like an astronaut, and will change, completely, the way you view life on Earth-especially your own. [goodreads]

My April A to Z Review 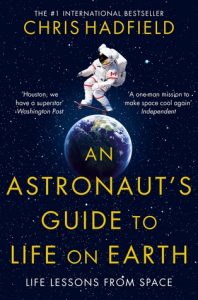 Chris Hadfield doesn’t sound like a Colonel.  He sounds like a regular guy. This might be because he’s Canadian, was acutely aware of his status as the first Canadian astronaut to make it into space, and uses some very simple techniques to get along in the hothouse of NASA. The competition among trainee (and established) astronauts leads to some useful behaviour tips.

He starts by taking us through his transformation from geeky kid who gazes at the stars, making choices on the path to his goals, right through to acceptance into the programme.  Then we explore astronaut training and his missions both on the Shuttle and Soyez to the International Space Station.  He talks regular talk, with minimal use of space jargon.  He talks about working with his colleagues, and managing the pecking order, like you or I might talk about getting along at our own workplaces.  His methods are worth thinking about, even for me with goodness knows how much training in interpersonal skills and organisational development.

There are some simple tips, and demonstration of how he used them.  I particularly like the minus-one/plus-one/zero ambition, which I’m not explaining here.  The concept goes against the grain for people who want to stand out. In practice, you are more likely to stand out, doing a better job, if you focus on the small stuff.  That’s a great help to me right now.

The other thing I took from this book was the reality of space travel; it’s essential reading for anyone who writes or aspires to write science fiction. Landing after his last mission, he vividly describes the depth of distress a human body feels after being weightless for five months.

It isn’t a perfectly written book; I found it jumped about a bit during the first half – past missions slotted in as an example during preparation for the latest one – but it all made sense. There are some simply beautiful passages. I’ll probably read it again. I’ve bookmarked a few pages  to refer to when things aren’t going so well.  I wish I had it on kindle instead of paperback! It’s a very human book, despite the technology involved, and one that I feel everyone can relate to. People whose partners are absent a lot of the time will empathise with his wife!

If you enjoy flashback posts, why not join in Flashback Friday?

April A to Z Challenge starts with An Astronaut’s Guide