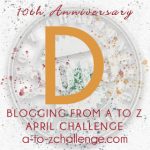 Doggerland relates to the land under the North Sea, off the coast of East Anglia, where the Dogger Bank forms a great sand spit of relatively shallow water, sometimes exposed at low tide.  Once there was a vast tract of land joining the British Isles to the European continent, but a combination of glacier retreat after the Ice Age and ‘isostatic bounce’ made that land sink relative to that around it, to form the North Sea.

The idea of a father and son marooned in this area, tending the great wind farms appealed to me. I wondered how it compared with The Light Between the Oceans and reminded me that I once wrote a short story with a germ of an idea for a book: Familiar Territory.

This book contributes to my reading challenges, 2019 New Releases, Mount TBR (since I added it in 2018) and Alphabet Soup (Author’s Edition).

Doggerland is published today!  Thank you Netgalley and the publishers for the advance copy. 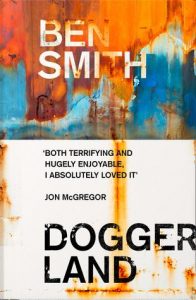 Doggerland is brilliantly inventive, beautifully-crafted and superbly gripping debut novel about loneliness and hope, nature and survival – set on an off-shore windfarm in the not-so-distant future.

‘His father’s breath had been loud in the small room. It had smelled smoky, or maybe more like dust. ‘I’ll get out,’ he’d said. ‘I’ll come back for you, ok?’ The boy remembered that; had always remembered it. And, for a time, he’d believed it too.’

In the North Sea, far from what remains of the coastline, a wind farm stretches for thousands of acres.

The Boy, who is no longer really a boy, and the Old Man, whose age is unguessable, are charged with its maintenance. They carry out their never-ending work as the waves roll, dragging strange shoals of flotsam through the turbine fields. Land is only a memory.

So too is the Boy’s father, who worked on the turbines before him, and disappeared.

The boy has been sent by the Company to take his place, but the question of where he went and why is one for which the Old Man will give no answer.

As the Old Man dredges the sea for lost things, the Boy sifts for the truth of his missing father. Until one day, from the limitless water, a plan for escape emerges…

Doggerland is a haunting and beautifully compelling story of loneliness and hope, nature and survival. [goodreads]

Stuck in a contract for a mysterious Company (shades of 1984, although we never know), the old man and the boy tend the vast wind farm, taking the maintenance boat around to fix turbines which need fixing according to the computerised maintenance report.  The report is nearly always wrong; some have no problem, others have an entirely different problem from what is reported.

The old man is a victim of his lonely trade.  The boy is becoming one, although he has a quest, to find out what happened to his father.  The Company forced the boy to take on his father’s contract when he disappeared.

And, with occasional forays into the state of Doggerland over the ages, that is the story. The old man and the boy. The power of boredom, the eroding of faculties by lack of purpose. The interactions between two people who, try as they might, cannot escape each other.

It’s strangely compelling. The seas and fields of turbines are part of the landscape, and characters in their own right. Having spent many hours gazing at the North Sea, I felt at home in this landscape, but awfully afraid of what might happen, or not happen, which was worse.

I’ve labelled it dystopia, because society has clearly broken down.  Is there even a society left, or are they left on their own?  I’ve labelled it weird, because it is, although maybe not in the formal genre sense.  I’ve labelled it environmental, because wildlife seems to have disappeared, and the tale of what catches onto their hooks tells its own story of the mess we are making of our planet. The writing was great, and the concept astounding. But I’m left feeling depressed, which is a sure sign of dystopia.

I hope you’re enjoying this year’s A to Z Challenge. My theme is flashbacks, and this is one of the few that is new.

Scroll back a couple of days to find this year’s A to Z Giveaway – at B for Bravo!