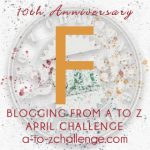 Flying seemed like a good post for the letter F.  It’s a theme that goes through a lot of my work, since I’ve been interested in it since I was very small, largely because my father worked for Imperial Airways and helped to set up the Flying Boat service through Africa in the 1930s.  The romance of flying got me early.

My A to Z theme this anniversary year is selections from my past seven A to Zs. My first year was 2012.  I did an A to Z of my Princelings world, which has characters based on my guinea pigs. At that time the first three books had just been published. I’d only been blogging eighteen months.  See what you make of it.

I’m sure I introduced a plane into the third story just for the fun of it, because a blue biplane flies over our house most days in the spring and summer.  When he was out in the garden George always looked up at it and followed its passage across the sky before going back to his grass.  This is strange as guinea pigs are supposed to be very short-sighted.  Perhaps it was a distinctive note from its engine that resonated with him?

However it quickly became a very important element of the story.  Flying is in my blood although I’ve never been up in a biplane.  It seemed to be something George [Prince Engineer George in the stories] could get sidetracked by very easily, and transporting Monsieur Bleriot a hundred years later was my way of doing it. 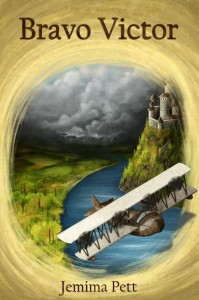 The late development of flying also gives me all sorts of plot development opportunities, some of which are works in progress—Victor’s Story (number [6] in the series) not only uses George’s adventures in his flying machine but also his engineering expertise advising on the development of a machine that can carry freight long distances.  It will be a while before it is sufficiently developed to carry Vex Ale to Hattan and bring Wozna back. Although there is a deadline for that to happen.

Would flying ever become popular in our fictional land?  Miles takes most of the persons of Buckmore up for joyrides, and makes Lupin thoughtful about what he can see of his kingdom from the air. It is a side effect much commented upon. Seeing things from a distance gives us new insights into them.

The development of flying combined with the opportunity to fly further using George’s portable strawberry juice power plants suggest some radical changes will occur in this world. Ones that I have not yet fully thought through.

Back to the future

I have been occupied with thinking through these changes ever since. I’m at Camp Nano this month writing the last book. I’m still visiting your A to Z blogs, though!

I had a special offer on for the first two ebooks in the series that year.  This year I’ve got a giveaway going on, launched on Tuesday with the letter B.  You might like to nip back and enter!  One prize is the complete set of Princelings ebooks. Another prize is for UK entrants only.  There are also three runners-up prizes.