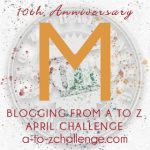 Manufacturing was an aspect of the Princelings world I hadn’t really thought through when I first wrote the books.  During 2012 I did the A to Z of the Princelings World for my first #AtoZChallenge.  This year my theme is flashbacks from my seven years of AtoZ-ing, in honour of the Challenge’s tenth anniversary.

Reading this I cringe quite often. I realise now that this A to Z really was a key part of building my Princelings world. I developed several ideas out of it. If you check Rebekah Loper’s A to Z of World-building you’ll discover just how much depth you really need to go into when developing your world from scratch.

Who makes the objects that the people in the Princelings world use?  Where do they get their raw materials from?  Although the world-travelled Lord Mariusz has souvenirs brought from many lands, the Princelings world (the realms) seems largely cut off from the rest of civilisation.  This must mean either they have inherited objects from some distant past or they make them themselves.

Prior civilisation of parallel universe?

Before I started this A to Z Blog Challenge I was still torn between a history built on some prior civilisation and a parallel universe for my Princelings world.  Now I have decided that it is a parallel world; they have technology for manufacturing these goods themselves.

Crafts like wood turning, brick building, and stone hewing are easy to adopt in this society.  Metal tools seem to be inevitable which suggests that somewhere there is a castle that mines and makes metal tools and other metal objects.  Maybe I have not yet located Castle Hallam.  It must be a very successful, powerful castle though, since it must provide the metal for Vexstein’s bottling plant, not to mention its brewery, and Dimerie’s wine silos that give George his inspiration for the strawberry juice power plant.  Metals are also well known throughout the land, since Saku takes it for granted that George knows of the electrical current that tingles your tongue if you put two different metal wires in your mouth.  And he does.  It must be part of their basic education. 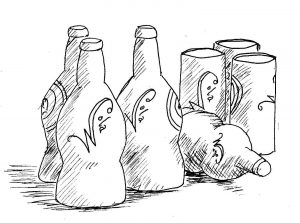 Glass for bottles and drinking vessels must be made where there is a usable source of heat energy, sand or silica.  As these are ancient crafts, I feel satisfied they can be manufactured in the realms, but it troubles me about the technology (and fuel source) used to raise very high temperatures, both for glass making and for smelting ores for the metal work.

There are also materials.  Fred and George relax on cushions in their cubby-hole behind their uncle’s apartments.  Where does the material come from?  What are they filled with?  I imagine that the filling, either of down and feathers, or of the fluffy seeds pods of willow, could provide the stuffing, but cotton would not be found in the realms.  Wool from sheep?  Would they harvest this?  Flax would grow but would make a coarser cloth.  I am tempted to allow the right sort of mulberry plant to grow in the realms in order that silkworms might provide silk!

There is also the possibility of trade in these fabrics but what would our realms export?  As Lady Nimrod says to Fred, “It is very wise to work for self-sufficiency”.  I think our realms are self-sufficient (at least with credit and bartering among each other) in food and domestic goods but I am not so sure that they can include more delicate objects made of non-native materials.  But perhaps I am being too unimaginative.  Just as strawberry juice has unrealised powers, maybe I should declare that fine silk-like material is made from dandelion flowers.  After all the seed heads are feather light.

Who makes the objects that the people in the Princelings world use? Where do they get their raw materials from? #princelings #worldbuilding Click To Tweet

Manufacturing, and mining in particular, became a plot point in Book 8, The Princelings of the North.

You can catch up with the Princelings series in the giveaway I’m running this month.  Nip back to B for Bravo posted on April 2nd.

Manufacturing in the Princelings World #AtoZChallenge

4 thoughts on “Manufacturing in the Princelings World #AtoZChallenge”