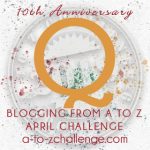 ‘Quadrants’ was part of my worldbuilding series on the AtoZ Challenge for 2016.  I’m doing flashbacks from my seven challenges in honour of the Tenth Anniversary.

I have a science fiction series that goes by the name of the Viridian System series.  In the second book, our heroes get stranded in the Delta Quadrant after accidentally going down a wormhole.  I decided that this phenomenon needed further explanation.

In my Viridian System series, I decided to define the structure of my Milky Way galaxy, just in case my characters decided to locate planets and star systems at any time.  It may not be necessary for the story, but I know the four quadrants of the galaxy. The Delta quadrant is least explored by the inhabitants of the Alpha quadrant, who are the ones who think they matter, and then mostly only in the innermost sector, near the heart of the galaxy.

Most of the action is focused on the Alpha quadrant. This is home to the Imperium, the Federation, and most of the ‘known’ trade and enterprise.  The Delta quadrant is home to the Jakochi Alliance, which becomes important to me in Book 2. This book also includes a foray into the Gamma quadrant, and a note that there are extraordinary aliens in the Beta quadrant, so nobody goes there much!

Off the spiral arms

Any star system in the tertiary system off the plane of the galaxy – the spiral arms – is bound to be a long way away from anywhere else.  The Viridian System falls into this category. It isn’t far above the plane, and gets a good view of the Milky Way (side on) at night.  Distances take a long time to traverse, even using warpshift.  I made a table for myself of how long it would take to travel various numbers of light-years at different warp factors (times the speed of light).  Weeks, months, years, centuries… so there are some useful wormholes around the place, artificial ones that are stable conduits between one part of a quadrant and another. One called The Sleeve provides a short-cut between the Alpha and Gamma quadrants (through the Delta quadrant).  It’s not the safest of places right now.

There are also unstable wormholes.  They are definitely not safe.  Nobody would want to encounter one of those.  You never know where you might end up.  Possibly in Book 2 of the Viridian System series, being written at Camp NaNoWriMo right now!! [Curved Space to Corsair]

PS.  Most maps of the Star Trek universe have the Beta and Gamma quadrants on either side of the Alpha, and Delta opposite.  This one, from Strait.org, has the same layout as mine, which harmonises with graphical quadrant concept in mathematics.

In the 3 years since I wrote this, we have managed to get pictures of the theoretically expected black hole at the centre of our galaxy.  See this article from Astronomy magazine.

More strange is that the plane of the galaxy is not flat, but sort of wavy, like a slightly twisted toroid.  Thinking about that, it’s not really surprising. Have you ever seen those dancers called the ‘whirling Dervishes’? They spin madly and have skirts that fly out.  There is a tendency to have undulations in the skirt as it spins.  It’s probably all part of the same thing.

This article from EarthSky.org tells more.