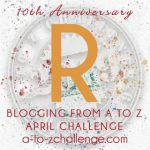 Heiða is my book for R for Review, which is my regular Saturday topic.  I’m breaking out of my A to Z Challenge Flashbacks to bring you a review of a fascinating book published on Thursday (18th April).  Thank you, Net-galley and the publishers, for the advance copy.

This counts in my Non-Fiction Adventure reading challenge, which I recommend, if you haven’t yet found it.  Set your own target of at least 50 books over a maximum of 10 years. That’s what I’m aiming for – 5 non-fiction books a year.  This is my fourth this year! 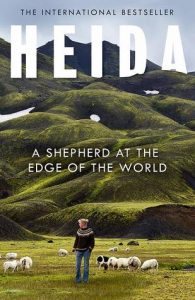 Heiða: A Shepherd at the Edge of the World

Heiða is a solitary farmer with a flock of 500 sheep in a remorseless area bordering Iceland’s highlands. It’s known as the End of the World. One of her nearest neighbours is Iceland’s most notorious volcano, Katla, which has periodically driven away the inhabitants of Ljótarstaðir ever since people first started farming there in the twelfth century. This portrait of Heiða written with wit and humour by one of Iceland’s most acclaimed novelists, Steinunn Sigurðardóttir, tells a heroic tale of a charismatic young woman, who at 23 walked away from a career as a model in New York to take over the family farm when her father died.
[…]
Divided into four seasons, Heiða tells the story of a remarkable year, interwoven with vivid stories of her animals and farm work and paints a unforgettable portrait of a remote life close to nature. [goodreads]

Note on Icelandic: read the ð as th in there, and when you come across Þ, read it as th in thing.

This is a fascinating account of Heiða’s life in the Icelandic uplands, her dedication to her farm, her animals and her friends and their lifestyle. Pulled into politics against her will, she managed to lead the fight against a bully-boy power station development. This would have ruined her very livelihood, as well as her home and the surrounding countryside.

Told in Heiða’s own words, she explains not only sheep rearing in all its gory and exhausting details, but also the problems of living next to glaciers and volcanos.  The river she lives on had a major flood which washed away several square kilometres of farmland by the coast, as well as roads and bridges.  Ice storms and winter freeze-ups are only partially compensated by the nightly aurora!

I think this would be more difficult to read had I not visited Iceland last year, getting close to some of the places she describes, including the National Park threatened by the power plant. I took photos of some of the flood damage, and also the lava flows from previous eruptions.

For someone without a basic feel for the language I think the names and place-names could be a distraction too far, since the story is presented in a rather disjointed and distracting fashion. I found some of the details and anecdotes repetitive, but that can add to the impact. The author wrote it on the basis of telephone interviews snatched at odd times in Heiða’s incredibly busy life.

I’m glad I read it, but it’s only a warm recommendation from me.  The story of the bullying developers is repeated in every country.  I suppose it’s good to know that lots of us stand up to them. Heiða has done rather better than me.  I suppose she makes me feel a tad inadequate!  But then, if I was younger she’d be an inspiration.

R for Review: a fascinating account of Heiða's life in the Icelandic uplands, her dedication to her farm, her animals and her friends #biography #atozchallenge2019 Click To Tweet

Don’t forget to head back to my post for B to enter my A to Z Giveaway this year!