The Stone Circle came out in February in the UK, and for once I hadn’t pre-ordered it.  So when I was on NetGalley’s original site by accident and saw it on offer for readers, I jumped at the chance.  This is the US edition, out on Tuesday, so I’ve had to hold back my review until it’s out!

It’s interesting to compare the covers, too – which I’ll do at the end. 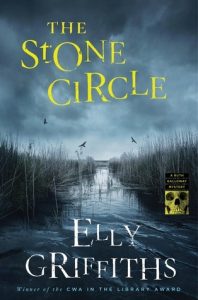 In a chilling entry to the award-winning Ruth Galloway series, she and DCI Nelson are haunted by a ghost from their past, just as their future lands on shaky ground.

DCI Nelson has been receiving threatening letters. They are anonymous, yet reminiscent of ones he has received in the past, from the person who drew him into a case that’s haunted him for years. At the same time, Ruth receives a letter purporting to be from that very same person—her former mentor, and the reason she first started working with Nelson. But the author of those letters is dead. Or is he?

The past is reaching out for Ruth and Nelson, and its grip is deadly. [goodreads]

This story is haunted by ghosts—echoes of the first book in the series, a crime that appears too similar to an earlier one, people appearing from the past…  As usual, the landscape plays a key part, nearly all in Norfolk, so the saltmarsh is weaving its tendrils through the atmosphere again.  But there is a foray into Somerset, to the stone circle at Stanton Drew, which I’ve not heard of before. I must visit…

The ever expanding family of Ruth and her friends, the police and their wives, husbands, girlfriends and offspring, are all there in force, along with the ghost of Tim [spoiler] killed in the last book [end spoiler].  Sometimes I get them mixed up, especially when the crime is a family one, and we get extended family and friends of the victims to follow, as well as sort out whodunnit.  But hey, it keeps you on your toes!

The writing is excellent, as always, the plotting keeps you wondering what’s coming next, the twists and turns raise and dash your hopes.  It’s all satisfactorily finished off, while leaving a little more of the human interest part of Ruth’s life for the next in the series.

I’ve awarded this one five stars, because all the clues were there, and I spotted them, but I missed the answer!  Actually, I think Elly Griffiths’ writing is even better than usual. I certainly couldn’t put it down.

The Stone Circle - out in US this week. 'Elly Griffiths' writing is even better than usual. I certainly couldn't put it down.' #ruthgalloway #crime @ellygriffiths Click To Tweet

UK one (Quercus)  v US one (Houghton Mifflin Harcourt)

Although the UK one shows a stone circle, the US one shows the saltmarsh.  There’s an inset skull in the US one, which I don’t really understand, but thought it could be an indication of a crime award, or just that bones are involved. I enlarged it enough to read ‘A Ruth Galloway Mystery’ above it, so maybe it’s a US brand thing.  The Marsh is in deep stormy and mysterious colours, contrasting with the UK version in pinky-beige light, even though it is probably swirling mist with a pale sun seen through it, and thick dark clouds above.

Having checked out the Stanton Drew website, I can assure you that the UK cover depicts Stanton Drew’s stone circle – that lumpy rock in the foreground is known as ‘the Cove’.  I suppose there are good reasons to include a seemingly minor trip across the country on the front cover, and most people won’t know it isn’t in Norfolk if they care at all. But, even though initially I preferred the UK cover, I now prefer the US one, since it’s more related to the action in the story.

Which do you prefer?