Sassinak was listed for one of the Space Opera Group’s books of the month for April, and unusually I got it read within the timescale.

It’s another for my SpaceTime Reading Challenge – which seems to be going rather well as I’m over halfway through in four months. 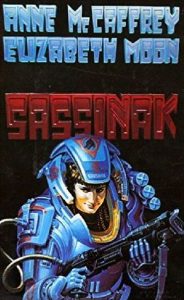 by Anne McCaffrey and Elizabeth Moon

Sassinak was twelve when the raiders came. That made her just the right age: old enough to be used, young enough to be broken. Or so the slavers thought. But Sassy turned out to be a little different from your typical slave girl. Maybe it was her unusual physical strength. Maybe it was her friendship with the captured Fleet crewman. Maybe it was her spirit. Whatever it was, it wouldn’t let her resign herself to the life of a slave. She bided her time, watched for her moment. Finally it came, and she escaped.

But that was only the beginning for Sassinak. Now she’s a Fleet Captain with a pirate-chasing ship of her own, and only one regret in her life: not enough pirates.

When I finished Sassinak, in only a few sittings, I knew I’d enjoyed it, but felt I’d grown out of it… or maybe it’s just my mood at present. Despite Sass growing up and becoming a 40-odd year old Captain/Commander, she still felt like a teen most of the times.

I think the hallmarks of Anne McCaffrey are all there – strong central female character, finding strong male partners to work with, but being too independent to tie them down for long… or are they coming back? But like many of AMC’s books, especially those in conjunction with Elizabeth Moon, it just ends, without there really being a climax. Maybe I’m looking for too much?

A good lightweight scifi for someone in their teens or twenties, maybe 🙂