Leaves of Fall was published yesterday!  It’s the latest from Patricia Lynne, who blogs beautiful words and writes a darn good plot.

Read more about it: 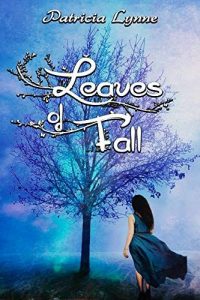 Armory was born into a post-apocalyptic world torn apart by war between man and nature. Trees are the enemy. But when she’s kidnapped by nomads and taken far from her home, a tree nymph is the one who comes to her rescue.

Birch promises he can get Armory home. He says not all trees wanted a war. Armory has no choice to trust him if she wants to see her family again.

Together, they trek across the ruins of America, meeting both human and trees who want nothing more than the fighting to stop. But the hatred between the two may be too deep to heal. Armory isn’t sure her friendship with Birch will be enough to convince the human race to take a chance on peace. Birch has a plan, though. He’s just not sure he’ll survive.

In a small town nestled in the heart of North America, the trees moved. People halted their daily activities and stared with mouths agape. They snapped pictures and filmed video as the trees assembled in a parking lot. The trees leaned toward the cars. Their leaves grazed the metal in a gentle caress, in an almost curious way. When the trees reached for the humans, they reached back, in awe of the trees’ movements and the history they were partaking in.

The trees straightened back up. Then, with terrifying force, they slammed their limbs into the cars and people. Adults and children alike were crushed under the weight of the wood. Roots shot from the ground and impaled people and dragged them back to the deadly limbs. When it was over, the pavement was soaked in blood, and the trees became still.
​
News stations were in an uproar and scrambled to report the massacre. Botanists, scientists, and nature activists were interviewed. Each claimed to know the answers. Religious leaders said it was the hand of God punishing man for wicked behavior. Skeptics insisted it was a freak occurrence.

Yet others believed it was Mother Nature. Global warming was real and destroying the planet. Mother Nature was defending herself against the blight: humanity. Rallies were organized. PETA stated they were on nature’s side and marched into forests across North America. Later, their corpses were discovered in an open field. A gruesome message was carved on their bodies.

It does not matter if you are young or old. Rich or poor. Believe or doubt. You have hurt us enough. We will fight. We will stop you. Man’s time has come to an end.

That was the start of the war.

Across the globe, trees struck at humanity. They tore their roots from the ground, invaded cities, and smashed everything in their path. As the message had said, if you were human, you were dead.

But humanity refused to go down without a fight. The most effective weapons were fire and axes. Flames spread from tree to tree quickly, and a swift stroke of an ax could severe a tree’s root from its trunk. Death was instant, whereas guns and bullets were ineffective. Small pieces of metal did nothing to slow them. Even riddled with bullets, a tree would keep destroying.

Armed with axes, chainsaws, and fire, humans fought with a fierceness that screamed survival.

For thirty years, the war raged. Cities were ravaged. Gas dwindled, and electricity died as dams and power stations were destroyed. Solar power was the only energy to survive. Forgotten arts such as blacksmithing were revived. Fiery forges burned as sweat-covered humans hammered metal into weapons to stockpile.

The trees fell still again. They did not attack, and their roots stayed planted in the ground. Humans hid in their ruined cities and watched with a wary eye. Some dared to hope. Nature was satisfied. Humanity had been beaten down, and now the humans were being given a second chance.

We won’t make the same mistakes, they cried to the clear, blue sky. We will respect Mother Nature!

Others weren’t convinced. It was too soon, they whispered amongst themselves. The trees can’t be trusted. 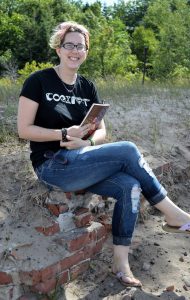 Patricia Lynne never set out to become a writer, and in fact, she never considered it an option during high school and college. She was all about art. On a whim, she wrote down a story bouncing in her head. That was the start of it and she hasn’t regretted a moment. She writes New Adult under the name Patricia Josephine.

Patricia lives with her husband in Michigan, hopes one day to have what will resemble a small petting zoo and has a fondness for dying her hair the colors of the rainbow.

My reviews of Patricia’s books:

7 thoughts on “Book Launch | Leaves of Fall by Patricia Lynne”