The Lie Tree was a non-winning nomination in our Great Middle Grade Reads Book of the Month last year.  I thought it sounded good so I added it to my TBR.  Then I saw it in the library….

This one contributes to my GMGR A to Z list, although I think it’s a bit dark for MG, and also to my Mount TBR Challenge, which is looking very slow at present.  Must do better! 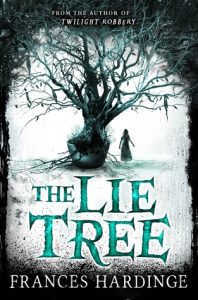 The leaves were cold and slightly clammy. There was no mistaking them. She had seen their likeness painstakingly sketched in her father’s journal. This was his greatest secret, his treasure and his undoing. The Tree of Lies. Now it was hers, and the journey he had never finished stretched out before her.

When Faith’s father is found dead under mysterious circumstances, she is determined to untangle the truth from the lies. Searching through his belongings for clues, she discovers a strange tree. A tree that feeds off whispered lies and bears fruit that reveals hidden secrets.

But as Faith’s untruths spiral out of control, she discovers that where lies seduce, truths shatter…

This book took an inordinate amount of time to get going, and I really crawled through the painstaking set-up of the problem, the flight to an small island, the islanders, the way her father behaved… and since her father was still alive at the point I was bored stiff, it was nearly a dnf.  Then he died.  Well, okay, he and his daughter did something really interesting just before he died. Talk about a cliff-hanger on the DNF front.

After that, it’s excellent, apart from some niggles over tide issues, some major mixing up of who’s who in my brain (especially the case when names are similar, but also suggest lack of character development).  It’s very scary, leaves you guessing even after you think it’s all solved, and I felt it was probably too dark for middle grade readers.  But then, I enjoyed Lockwood & Co more, and it’s in that gothic ilk.

Worth a read if you fancy something in the Wilkie Collins line for teen readers.

And it’s got an interesting cover.

The Lie Tree by Frances Hardinge 'very scary, leaves you guessing even after you think it's all solved... probably too dark for middle grade readers... Wilkie Collins for teen readers' #LieTree #bookreview Click To Tweet

And I’m glad we don’t have these kind of trees in real life! #30DaysWild

8 thoughts on “Book Review | The Lie Tree by Frances Hardinge”