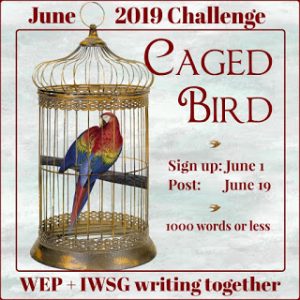 Caged Bird is the prompt for this months’ WEP+IWSG short story competiton. It’s a blog meme, but it’s also a competition, since there are winners, although nobody is a loser. The standard is generally impressive.

This month was a great prompt as I wanted to weave in my #30DaysWild Challenge as well. The Wildlife Trusts in the UK challenge everyone to do something wild every day in June. It doesn’t have to be much, or take a lot of time – it could be as simple as gazing at the clouds. That’s a Random Act of Wildness!

For me, I decided to take a jungle hike with my wildness link. It was also inspired by some friends who used to work at WWF UK. One was responsible for answering questions on the CITES (Convention on International Trade in Endangered Species) rules, as well as promoting projects to support communities that helped prevent trading in endangered species to the West and to China. Like the trophy hunters you’ve seen pictures of on the net, these countries host the main purchasers of wild animals, trophies and ingredients for Chinese ‘medicine’. I’d like to make every trophy hunter a caged bird!

Caged Bird is 989 words. I hope you enjoy them. All comments are welcome.

He was the epitome of the upperclass naturalist explorer. From his fedora with the leopard-skin band, through the fashionably long hair curling round to frame strong cheekbones and a well-made jaw, crowned with a medium-sized hawk nose, past the khaki safari suit with the long cream socks to the best walking boots money could buy—it all said ‘Trust me, I’m an explorer’.

Carla thought it also said: ‘Trust me with your night life’ to certain clients, but she was not one of them. She could see through his plumage, where many would be dazzled.

The jungle of the Indonesian island was hot, crowded with leaves and buzzing insects, and mostly humid. She slapped the occasional mosquito that got through her face net. Their leader’s arms, knees and face seemed to be immune.  Carla wondered what brand of repellent he used.

“Garlic pills,” he responded to the question posed by one of the other four members of their party.

Carla gave herself a crooked smile. Their local guide just ate garlic, that much was clear. She stuck to face-net, long sleeves and trouser legs tucked into puttees.

“Watch for snakes in these trees imitating vines,” he called back as they pushed through towards a more open area, sliding on the wet roots that stretched like fingers reaching for a lover.

They crossed the river on some convenient stepping stones that looked just casual enough to be natural. For a journey into unmapped territory to find these particular birds of paradise, the route looked remarkably well-tamed. Yes, it was overgrown, but in this climate, that was only a week’s growth at most. Carla called his attention to some monkey noises in the forest canopy, and the mini-lecture began.

Carla carefully manoevred her camera to take general shots of the clearing that included him when his back was turned. He was camera-shy, he’d informed them. He preferred not to have his picture taken. She’d sneaked one at dinner, a good face recognition shot. The back view was good enough to place him in this scene, with a trail that was clearly in regular use.

He finished telling them about the grey-backed monkey lemurs, and someone asked if they could get a shot of them. Carla flipped to the page in her island wildlife guide to get a picture to share with the speaker. It occurred to her that, as well as the sideline of her guide she was there to prove, he might have other add-on services for those willing to pay privately. Like trophy hunting.

Another day into the forest and they arrived at the bare bones of a camp. The local guide chivvied the three bearers to set up quickly, while the fourth unpacked his kitchen around a rocky fireplace and started on dinner. Carla toured the campsite, noting other ways in and out. The advertised ‘wilderness safari’ came with nearly all mod cons.

The night was what they were all hoping for. Sounds of birds of paradise whooped through the jungle as twilight fell. Their leader consulted the guide, and then told everyone to be ready to leave in ten minutes. “Keep one hand on the string at all times. It will help you find the way out.”

He reminded them of the need for stealth: “any person to make a noise will be returned to the camp, with no argument.”

When he’d first briefed them, he’d made them each sign a disclaimer that allowed this treatment. Carla wondered whether it was just a get-out so that nobody actually saw the birds of paradise. But then, somebody must, or the trip wouldn’t have gained its stellar reputation.

They filed through the undergrowth, trying not to swish a branch or step on a twig. In the near-dark it was a virtually impossible task. One by one her companions were turned back, the use of a torchlit flash card showing them a reason for their ejection.

The sounds of the birds were louder now; Carla’s heart beat faster, she took extra care with every step. She was the only tourist left. But the bird sounds troubled her. Too regular, too similar. Underneath she could hear more distressed sounds, chacking and screeching.

The guide stepped in front of her, and flashed a card ‘you broke a twig – go back’.

Carla knew she had done nothing of the sort. She glared at the guide, who stared impassively, just as he had the others.

She sighed and turned around, one hand on the string, following it, very slowly, listening to the leader.

With no tourists left, what would he do?

He went on without her. Just him and the local guide.

Carla waited, counting to herself. She checked the special camera she’d been issued with, attached it to her shoulder, and turned it on. Then she turned back, to follow them.

By the time she reached the edge of the clearing where the birds were supposed to display, the leader and guide were using their flashlights to release several males from a sticky branch previously left as a trap. Some were still displaying for the female, despite the fact that she’d fled with the arrival of the humans.

Carla watched and recorded the scene as five males were carefully placed in inidividual sacks and slung about the local guide. Their leader reached up into the tree and the calls ceased.

Carla slunk into the side of the forest, behind some large leaves, so they didn’t see her as they left.

Indonesian customs let them through with their goods, but Australia picked them out of the ‘nothing to declare’ line, and pulled the full weight of the CITES agreement down on them.

Their leader spent six years in prison, considering the waste of his prime as a caged bird, just as he had wasted the gorgeous plumage of the birds he had stolen.