The Dark Portal is the first in the Deptford Mice series by Robin Jarvis.  I added it to my list ages ago, possibly at that Children’s Fiction workshop I did so long ago. Then I found a copy in the charity bookshop that the narrow gauge railway has at Hoveton (Wroxham), in Norfolk. For 50p it was worth the read!

This gives me a J in my Alphabet Soup Reading Challenge (authors), and a D in my GMGR A-Z Challenge. Also, at last, a step on my TBR Mountain!

The Dark Portal (The Deptford Mice #1) 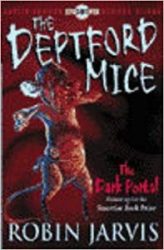 In the sewers of Deptford there lurks a dark presence, which fills the tunnels with fear: Jupiter, an evil being who aims to take over the world. Worshipped by the fearsome rats, Jupiter’s dreams could well come true. Can the mice ever survive against such evil? Or have they lost the comfortable world they once knew for ever.[goodreads]

In 1989 there probably wasn’t as much anti-anthropomorphism as there was a decade later.  This book seems to have gone in and out of fashion, but still came through ranked as a good spooky tale for children.

I’m not so sure of that.  It starts well, with a scary event happening to Arthur Brown, a respectable mouse drawn into the sewers below Deptford for reasons I’ve forgotten.  He fails to return and most of his family give him up as lost. Nobody should venture beyond The Grille into the sewers.  His daughter holds firm to her belief that he’s alive, and goes, or is enticed, into the sewers to search for him.  As a result, several other parties set off in search of her.

In my normal manner I got confused as to who’s who between readings, but eventually their characteristics became clear.  The denizens of the sewers are a whole different breed, and although they too have their distinguishing features, it hardly seemed worth remembering the distinctions since they are all extremely nasty, violent, and potentially deadly, as far as the mice are concerned.

Several strands of tale interweave, sometimes backtracking, and I began to find it a little tedious, when much of the action was along the repetitive ledges of the tunnels above the black water.

Some scenes stand out for excellence, imagery and sheer terror. Is this really suitable for children?  I think I’d have had nightmares.  Like Lockwood & Co, I think it’s for older children, although in this case the language and style is often simplistic, and sometimes downright old-fashioned. The early part could do with a good edit. It reminded me of the improvements I made to the first of my books.  I wonder if Mr Jarvis, writing it in 1980s, now feels the same.

The actual plot is really straightforward, although complicated by the several strands. But the way it is told makes it stand out. I nearly didn’t finish it, because the ending seems obvious some way off, but the climactic scene is brilliantly, if horrifically, described.

I don’t think I enjoyed it, and I won’t be reading more of the series. I’m sure many older kids, especially those who like London and real places in their reading, will enjoy this very dark tale.