Galileo’s Theme Park is an anthology, part of Third Flatiron’s series. They call for submissions about three times a year. You can see future calls, as well as past publications at their website here. 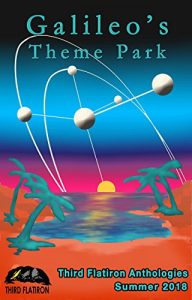 I have a number of anthologies in my reading lists, and most of them are brilliant. The only trouble is that I have difficulty remembering the stories afterwards. I can confidently say that I enjoyed this set enormously, and recommend it to you, whether you like gentle, contemplative scifi or full-on space opera.

One of the things I was most interested in, as I read it, was how the stories fitted together.  What makes an editor select certain stories for their collection?  A strong story, well-written, of course.  But what is that special something that gets them selected from presumably hundreds of submissions?

Several of the entries featured the Galilean planets and their satellites. Others went beyond the bounds of Galileo’s telescope, to the edges of black holes and other places. Some didn’t even leave Earth.

The one that jumped into my mind first was something so wonderful, I wondered how a brain could come up with the idea.  Galileo is abducted by his inquisitors, leaving his lowly assistant to clear up the mess…and he just has to take a peek down his master’s seeing-glass. What happens next is totally brilliant. There is some relationship to an idea I have for Viridian 3, but I’ve already written the flash fiction for the idea, so I have no qualms that I might be accused of plagiarism.  Like but not alike – I could never have come up with something this brilliant!

The first two in the book are also memorable in that I needed only to read the first line of each to remember them. They are sad, or scary, or… well, they are what you make of them.  In concept they are each very different, but both have a great deal to say about the human condition and the future of space flight.

Galileo's Theme Park - #anthology 'What they have in common is a strange difference, a twist, a thought about what the future might bring (or the past might have brought)' #thirdflatiron #flashfiction Click To Tweet

What they have in common is a strange difference, a twist, a thought about what the future might bring (or the past might have brought without us seeing). I’m pleased to have my story included in this anthology, although I accept it may not be as strong as some – but it is different.  Overall, Galileo’s Theme Park is a first-class production, worthy of re-reading.  In fact, I think I’ll read some of them again now.