Grimm, Grit, and Gasoline was one of Rhonda Parrish’s anthologies that I didn’t try to enter, because I didn’t understand what she was looking for.  So I read it to find out.  I also managed to snag a pre-publication copy via Net-Galley, so thank you to both Rhonda and NetGalley.  Sorry I didn’t get to review it in time for launch day, but the download date was a bit close.

As with the anthology I read when I first found her, Equus, this is excellent. 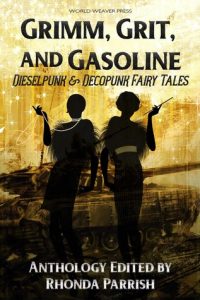 Dieselpunk and decopunk are alternative history re-imaginings of (roughly) the WWI and WWII eras: tales with the grit of roaring bombers and rumbling tanks, of ‘We Can Do It’ and old time gangsters, or with the glamour of flappers and Hollywood starlets, smoky jazz and speakeasies. The stories in this volume add fairy tales to the mix, transporting classic tales to this rich historical setting.

Two young women defy the devil with the power of friendship. The pilot of a talking plane discovers a woman who transforms into a swan every night and is pulled into a much more personal conflict than the war he’s already fighting. A pair of twins with special powers find themselves in Eva Braun’s custody and wrapped up in a nefarious plan. A team of female special agents must destroy a secret weapon–the spindle–before it can be deployed. Retellings of The Little Mermaid, Hansel and Gretel, Rapunzel, Cinderella, The Monkey King, Swan Lake, Pinocchio and more are all showcased alongside some original fairy tale-like stories.

This book is a real treat!  I didn’t realise from the call for submissions it was really ‘retell a fairy tale in a wildly different setting’ although that’s pretty much what the call said.  How far does one have to go to avoid plagiarism?

As it turns out, reimagining fairy tales is not plagiarism, and you can use exactly the same names if you like.  Just put them in a completely different setting, with some imaginative twists, so that the reader almost knows what’s coming, but it’s enjoyably different. And since I’m a bit hazy on some of the fairy tales included, I didn’t actually know what was likely to happen anyway.

I can honestly say that I loved nearly all the stories.  It just got a tiny bit tedious towards the end.  Maybe three fewer stories in the anthology would have worked better for me.

The editor confesses she included two that weren’t exactly on theme, but I’m glad she included them, because they were brilliant. They may have been my favourites.  But I was ready to say that after each of the first five.  They were all excellent.

Grimm, Grit and Gasoline is an absolute gem, and a great book for picking up and putting down again a short while later. Or just continuing to the next one if you’re not short of time. Look out for more!

Reimagined fairy tales with the grit of roaring bombers and rumbling tanks, of 'We Can Do It' and old time gangsters, or with the glamour of flappers and Hollywood starlets, smoky jazz and speakeasies. GRIM GRIT AND GASOLINE… Click To Tweet
Book Review | Grimm, Grit, and Gasoline ed. Rhonda Parrish