Master and God is not a Falco novel. It’s not a Flavia Alba novel either (although there is a new Flavia Alba out, and I’m getting seriously behind with that series). It is set in Ancient Rome, and it is by Lindsey Davis. I got the audiobook from my mobile library to listen to on my travels to and from Hampshire recently. Big mistake, as it turns out. 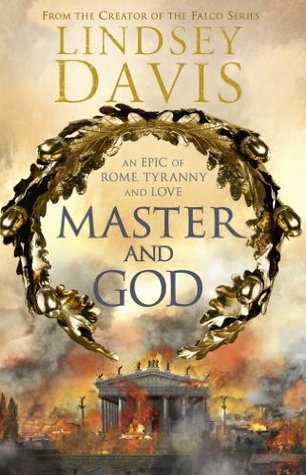 Afflicted by classic paranoia, the self-styled Master and God sees enemies everywhere. As he vents his suspicions, no one is safe. A reluctant hero, Gaius Vinius Clodianus is hand-picked for high rank in the Praetorian Guard a brave man striving for decency in a world of corruption and deceit. Flavia Lucilla, tending the privileged women at court, hears the intimate secrets of a ruler who plays with the lives of his subjects as if he were indeed a careless god. In the dark shadow of Domitian’s reign, Clodianus and Lucilla play out their own complex tale of resilience, friendship and love. Unwilling witnesses to Domitian’s descent into insanity, these ordinary people must choose between their sworn duty to protect the Emperor and an act of courage that will change the future of Rome. [goodreads]

This is more a review of the audiobook than Davis’s story, since I didn’t finish it. I’ll come to the reasons later, and pick up Rebecca Douglass’s approach to reviewing the story and the audio bit in two parts.

Lindsey Davis’s Rome springs to life once more as she tackles a different era – Domitian. He followed his father, Vespasian, and his brother, Titus, who died in quick succession.  Was Domitian to blame for their deaths?  Was it one more horrendous accident at a time when Rome was recovering from the destruction of Pompeii after Vesuvius erupted, only to be engulfed in flames of its own making?

Davis’s descriptive writing is just brilliant. She uses narrative points of view from three very different strata of Roman society to immerse you in the minutiae of daily life. The society of the vigiles brings their lifestyle and the memory of the Britannic mud. The difficulties of making a living as a hairdresser include the architectural requirements to fix lavish hairstyles that Marie Antoinette would have envied.

The Domitian lifestyle from the point of view of Musca – the latin for fly – was simply superb.

I have put this book back on my TBR to read at leisure and enjoy its sumptuous prose.

Not best in audio

As you may have guessed, the audiobook of Master and God didn’t work for me.  The elegance of the prose made it hard to follow the story, especially when driving.  Maybe sit back with eyes closed and listen to the narration.  The actors chosen (Clare Corbett and Jonathan Keeble, who didn’t necessarily take the male and female parts, just read different sections) had beautiful, clear voices and a good range of characterisations. But they did read slowly. They gave full rein to all the beautiful descriptive writing of the author.

It required full concentration.  If you want to do anything else while listening to an audiobook, even things you think are mindless, like housework or ironing, don’t choose this book.

If you want to immerse yourself in the fading glory of Rome, with the sights, sounds (and almost the smells), in a slow plot richly embellished with atmosphere, then this is for you. All 16 hours of it.

I’ll read it later. (And I suspect the previous renter stopped at roughly the same place).

Note: I’m currently suffering some Fatal Error file problems which include inability to upload photos because a temp file is missing. If any other WP users have solved this, do let me know

One thought on “Audiobook Review | Master and God by Lindsey Davis”