The Long Flight Home appealed to me because it featured the British Pigeon Service during World War II.  Thank you, Net-galley and the publisher for the opportunity of a pre-release copy. The book was launched on Thursday. 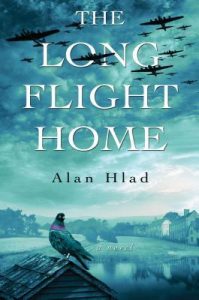 Inspired by fascinating, true, yet little-known events during World War II, The Long Flight Home is a testament to the power of courage in our darkest hours—a moving, masterfully written story of love and sacrifice.

It is September 1940—a year into the war—and as German bombs fall on Britain, fears grow of an impending invasion. Enemy fighter planes blacken the sky around the Epping Forest home of Susan Shepherd and her grandfather, Bertie. After losing her parents to influenza as a child, Susan found comfort in raising homing pigeons with Bertie. All her birds are extraordinary to Susan—loyal, intelligent, beautiful—but none more so than Duchess. Hatched from an egg that Susan incubated in a bowl under her grandfather’s desk lamp, Duchess shares a special bond with Susan and an unusual curiosity about the human world.

Thousands of miles away in Buxton, Maine, a young crop-duster pilot named Ollie Evans has decided to travel to Britain to join the Royal Air Force. His quest brings him to Epping and to the National Pigeon Service, where Susan is involved in a new, covert assignment. Codenamed Source Columba, the mission aims to air-drop hundreds of homing pigeons in German-occupied France. Many will not survive. Those that do make the journey home to England can convey crucial information on German troop movements—and help reclaim the skies from the Luftwaffe.

The friendship between Ollie and Susan deepens as the mission date draws near. When Ollie’s plane is downed behind enemy lines, both know how remote the chances of reunion must be. Yet Duchess’s devotion and her singular sense of duty will become an unexpected lifeline, relaying messages between Susan and Ollie as war rages on—and proving, at last, that hope is never truly lost. [goodreads]

Oliver leaves his home farm in Maine when his parents are killed in a car crash.  All he wants to do is fly, and in particular, support his heritage – his grandparents were British, and the US is staunchly neutral. Inevitably he meets our heroine, and crosses the path of her childhood school bully, now Flight Lieutenant Boar, and recrosses it, and then is thrown together with him and his venom.

At one stage I felt that I wouldn’t be reading this book if I had realised it was really a soppy romance, with what seemed like a cliched storyline.  To some extent that summary is valid, but it is much more than that. The role of the pigeons in the service of our country not well-known, although pigeon war medals sometimes end up in antiques shows on tv. It’s probably total news to anyone outside the UK (and possibly France).  Mr Hlad has handled that story well, with the occasional straying into unlikely territory over the initial meeting.

If I noticed that the majority of the book is set in Epping, I had forgotten it until I opened it. These days I usually steer clear of stories set in places I know well. Regular readers know that I am prone to ranting about inaccuracies within. In this case, I am a little hazy about Epping’s specific layout in 1940, since I wasnt there then (although my house was), but I do know what roads have been built since 1950. I suspect some of the author’s journeys, especially the one to Ely, are a stretch too far. Well, actually, too short.  Be that as it may, the atmosphere, and the sense of terror which deadened into numbness during the course of the Blitz, were well constructed and presented.

All in all, it’s a gripping piece of wartime drama, with a cute ending, but probably that was the trigger that sent Mr Hlad on his journey of discovery in the first place. Highly recommended, if you can put up with the clunky romance element.