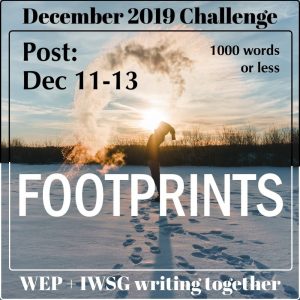 Footprints, and December, came together to give me some inspiration at last.  So I’m back in the saddle for the December WEP+IWSG flash fiction adventure.

I think the team at WEP have done a great job of turning what seemed to have got out of hand back into an enjoyable event for all parties.  Well done, and thank you. It can’t be easy dealing with a load of disparate over-enthusiastic authors!

The footprints led away from her.

That is, she could see the ones about three feet in front of her, and new ones appeared as she stepped into their tracks.

There was nobody there to make them.

It had been the usual sort of response to a snow forecast in the UK: people panicking, all the usual over-reaction to warnings of a ‘huge’ fall. It might make everything white, but if you went out and measured it, there was little more than an inch on the ground. In English terms, it was a lot.

So when day eventually dawned, although the clouds were so low the light was more dim than dawn, she looked out, and delighted in great dollops of white hanging from the bare branches of her tree, weighed down so the slender twigs nearly swept the ground. Blackbirds and robins were already out, scraping the snow and turning over leaves under the bushes in hope, if not success. The chaffinches and blue tits held on grimly to the branches, waiting their turn at her seed feeder.

Theirs was the only movement.

The neighbours’ cars were lined up in the parking area, humps of white imitating cartoon sketches. Nobody stirred. Even the most driven weren’t driving this morning.

She pulled on her dressing gown and made the first coffee of the day. The news had all the usual BBC over-reaction, people stuck in blizzards as far south as Nottingham; few trains running, people advised to stay at home and not travel, blah, blah.

By ten o’clock the clouds had lifted, and there was promise of one of those wonderful winter days when the sun shines and the snow stays crisp. She dragged her snow boots out of their drawer, tutted at the state of the soles, and remembered the place she’d bought them – they must be forty years old by now.

Wrapped up in two layers of sweaters, waterproof lined over-trousers, fleece jacket, her boots, mitts, hat and scarf, she set out for her walk. On the doorstep she paused, and returned to get her walking pole, just in case. She was prepared.

There is something about thick snow, newly fallen. It absorbs all sound, except dripping.

She could see birds darting about, but they were noiseless, perhaps in respect to the day.  Even redwings in the tops of the trees had ceased their chatter, and not because she was passing underneath.  She accompanied her journey with a swish of the trousers and the squeak of the snow underfoot. And occasionally a clank as her pole struck a stone hidden beneath the surface.

She paused now and then to look at tracks crossing her path – these might be some sort of vole or mouse; those must be a rabbit.  Some small, more circular ones made deep holes in the snow, and she couldn’t see the print beneath the surface.  A large animal, since it hadn’t had any difficulty lifting its feet out of the holes it had made. A deer probably, there were plenty in the woods around here.

She came to the end of the track through the woods and leant for a moment on the fence, looking out onto the fields beyond, stretching away down the valley. The light was still good up here, but lower down the gloom had set in already, perhaps a fog was getting up. She shivered.

She’d only planned to come this far and return, but something made her leave the security of the wood, and strike off at an angle, contouring along the hillside towards the three trees encircled by bushes that adorned the lookout. She hadn’t been to Mother Carey’s Hill for five years or more. Today was a good day to change that.

She was half way across the vast whiteness covering the turf when she felt a presence.

She stopped, looked around, but could not see anyone.  Where did she think this presence was? Not behind.  Not in front. Not on either side. She looked up… nothing, although the clouds had thickened again and the light was dull and flat. She really ought to go back. It might even snow again.

That was when she saw them. The footprints, being made as she watched.

They were like the ones she’d presumed to be deer. Four legs were making them, but there was nothing… she could see through whatever made them to the edge of the wood ahead; the tracks were headed there.

Was there some sort of shimmer in the air?

Was the entity who made the tracks invisible to her?

She made to ask the question: who’s there? But the words died on her lips.  Who would be there? Why would they keep steadily on if they wanted her to know?

She followed, at the entity’s pace, keeping a respectful four feet behind the latest tracks.

Just before they reached the forest edge, she wondered what she would do if the entity turned away from her home. She should be getting back. Light was fading. She should not be on any but familiar paths through the wood…

The tracks went on through a gap in the bushes, strung across with barbed wire to mark the boundary. Then there was a shuffle, the snow mixing up with the leaves on the ground. Something made the barbed wire bend, as if someone was holding it down for her to cross.

She hesitated… then crossed.

As she did, she felt the warmth of a large animal, its breath on her cheek, the scent of… not horse, but something similar, sweet and subtle. Then the sensation left her. The fence resumed its height, the tracks went on, but the entity had gone. She peered into the woods, and could swear she heard a tinkling of laughter, and saw a flash of silver, and a deep blue eye.

But she was on her usual trail, and no sign of the unicorn remained.

Please go and enjoy some of the other efforts for this prompt: you can find the participant list here.