The Ninth District by Douglas Dorow has been sitting in my Kindle since 2012.  Shame on me!  It’s not the only one.  And, as happened with others, like Daemon by Doug Dandridge, it’s a gem.

These books date from my early excursions into publishing, when we were all self-pubbing on KDP (which was just Kindle publishing then). Amazon had just introduced the idea of having up to ten (I think) ‘free promotion’ days in the three months you were committed to exclusive publishing on its own platform. It was new fresh and exciting, and I was probably one of the thousands of downloads Mr Dorow got in his free days. I mean, my books got thousands of downloads, so his must have tens of thousands, being in a more popular genre.

This is why I am so cynical about all those free copies of my books floating about in other people’s Kindles.  If I have a few hundred to read and I do so at the rate of one a year, how are they ever going to get to mine? 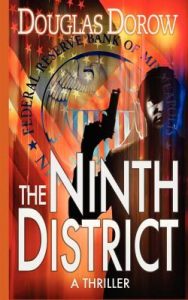 The Federal Reserve has never been robbed. FBI Special Agent Jack Miller, pulled into a high-profile case to mentor a new agent, finds himself in a clash with the toughest opponent of his career. The chase culminates in the bowels of the city, in the storm sewers and tunnels beneath The Ninth District Federal Reserve of Minneapolis. [goodreads]

The Ninth District is a part of Minneapolis where the US Federal Reserve occupies a large impregnable building. It’s in Minnesota, and the summers are hot.  The heat permeates the pages of this book, and I wonder how they can even think of going out running, even at 6 am.

The author opens the story with a puzzle for our investigators, an old embittered one and a rookie. They duly set out to solve why a serial petty bank robber has turned killer. The plot gets going strongly: character building for both detectives along the way. Plenty of colourful bit-part players may or may not turn out to be involved in the action. As a viewer, you’re pretty sure the detectives really shouldn’t get too close to … oh, too late.

Yes, the story is well constructed, well developed, and had me turning the pages avidly to discover what twist would turn up next. It’s a real thriller, with plenty of danger and emotional highs.

It was only after I finished that I wondered what happened to certain people. Certain things seemed unsolved, forgotten along the way. Mr Dorow decided to answer some ‘reading questions’ for us at the end of the book. That explained one of my causes for concern rather unsatisfactorily. If he hadn’t answered the questions, I’d have been left wondering. As it is I felt let down by his construction.

So having finished the story, thinking ‘great book!’, I docked him a star for the cop out.  But it’s a first book, and we can all be forgiven mistakes with our first loves.  If you see more of his books, especially the series started by The Ninth District, get reading!

4 thoughts on “Book Review | The Ninth District by Douglas Dorow”