The Year Without Summer caught my eye when NetGalley listed it. The eruption of Mount Tambora caused an ash cloud to reach into the upper atmosphere, and travel round the globe.  I’d read about it, and others, in my geology courses.  Remember the chaos caused to flights  one summer in the early 2000s because of the Iceland ash cloud?  This was worse, because the Iceland clouds were not so high, so were only of ‘local’ concern. Mount Tambora literally blew itself apart.

Despite having read and reviewed Climate Change and Health of Nations a few years back, I hadn’t really connected the effects of drought, tempest and winter all year round on the people living through it.  Guinevere Glasfurd brings it all into your own cosy home. How would you cope in a nuclear winter?

The Year Without Summer 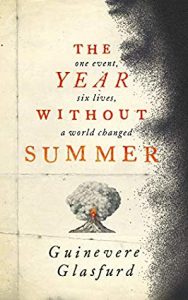 In 1815, a supervolcanic eruption led to the extraordinary ‘Year Without Summer’ in 1816: a massive climate disruption causing famine, poverty and riots. Lives, both ordinary and privileged, changed forever.

1815, Sumbawa Island, Indonesia
Mount Tambora explodes in a cataclysmic eruption, killing thousands. Sent to investigate, ship surgeon Henry Hogg can barely believe his eyes. Once a paradise, the island is now solid ash, the surrounding sea turned to stone. But worse is yet to come: as the ash cloud rises and covers the sun, the seasons will fail.

1816.
In Switzerland, Mary Shelley finds dark inspiration. Confined inside by the unseasonable weather, thousands of famine refugees stream past her door. In Vermont, preacher Charles Whitlock begs his followers to keep faith as drought dries their wells and their livestock starve. In Britain, the ambitious and lovesick painter John Constable struggles to reconcile the idyllic England he paints with the misery that surrounds him. In the Fens, farm labourer Sarah Hobbs has had enough of going hungry while the farmers flaunt their wealth. And Hope Peter, returned from Napoleonic war, finds his family home demolished and a fence gone up in its place. He flees to London, where he falls in with a group of revolutionaries who speak of a better life, whatever the cost. As desperation sets in, Britain becomes racked with riots – rebellion is in the air.

The Year Without Summer is the story of the books written, the art made; of the journeys taken, of the love longed for and the lives lost during that fateful year. Six separate lives, connected only by an event many thousands of miles away. Few had heard of Tambora – but none could escape its effects. [goodreads]

As you can tell from the blurb, this is a book that takes a disparate set of people, and examines the impact of a cataclysm most of them haven’t even heard of, upon their lives.  While The Times has featured a story of a volcanic eruption in a far-off colony, most (if not all) of the protagonists do not read the Times.  The general population has no idea why the weather has gone crazy.  Snow in summer, weeks at a time, freezing what crops have struggled through the dim and dreary spring.

In England, things were already difficult. Napoleon has been defeated, and fifteen years of war are at an end. The soldiers are back, and most have no job, or even home, to go to. While some generals were fighting the French, the stay-at-home gentry were busy enclosing the commons – making sure that they got all the wealth of the land, and fencing off the places were villagers used to graze their solitary cow, or run their chickens.

Characters from all levels of society

Guinevere Glasfurd finds characters at all levels of society with whom you can sympathise.

The unemployed soldier, latched onto by a lame country lad, finds the family home gone completely.

The farm girl, who has to work hard for her penny a day – half what the men get, and half what it used to be. And with crops dying, there isn’t much work to be had, even without the new machine called a thresher, that can do the work of a dozen men.

John Constable, the famous painter, has yet to find fame or fortune – he’s struggling from commission to commission, and vilified by the rich patrons of the Royal Academy, but he can see the changes going on around him.

Charles Whitlock is possibly the least sympathetic character, but he’s well drawn, as is the fate of the Vermont farmers.

And Mary Shelley has her own problems trying to keep everyone happy in their idyllic Swiss summer home, where she has to use a light at five to read, when it should still be light at ten. The storms over Lake Geneva and the mud running down the hillsides… it’s easy enough to feel you’re with her.

It feels grim and it was grim. And Guinevere Glasfurd writes it beautifully.

You can see all the reasons behind civic unrest as the anger grows. You can predict the disease and starvation, the tempers and the brawls, the dog-eat-dog mentality.

And every now and then we return to the expedition that discovered the volcanic eruption had happened.  The detail of the event, its impact, and the horrible, horrible consequences of a mountain exploding and raining tonnes of hot ash and pumice down on the occupants…  Glasfurd takes you into the hellhole through seas of rock, to a desolate, decimated populace, where her surgeon can do nothing to ease the atrocity or people’s burns.

Vividly told, drawing across all strands and all sciences, this is magnificent and awful historical science-based fiction. And this is natural disaster causing climate change… a temporary blip, maybe, but no less significant in its impact on the world, and people’s way of life.  A truly awesome book.

THE YEAR WITHOUT SUMMER 'It feels grim and it was grim. And Guinevere Glasfurd writes it beautifully.' #historical #climatechange #volcano #societalchange Click To Tweet
Book Review | The Year Without Summer

2 thoughts on “Book Review | The Year Without Summer”