The Conspiracy of Magic is the second Harriet Whitehorn book I’ve read.  I think the publisher offered me the book via Net-galley, but too close to the publication date for me to fit it in.  It’s a shame, as I found a couple of what I felt were plot holes. I’ll review it as if it’s been fixed before publication.

The Conspiracy of Magic (Company of Eight #2) 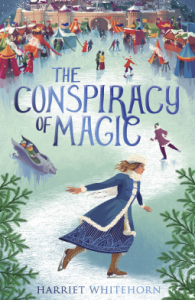 In a world where magic is so powerful it has been outlawed, Cass is a rare creature ­– an obtuse, someone who is unaffected by magic. But what has always felt like a handicap becomes a strength when sorcerers and magicians begin to perform magical deceptions with malicious intent. The Queen of Minaris is in grave danger and it’s up to Cass to protect her. But how can Cass defeat the sinister magician behind it all with no powers herself?

A thrilling tale of bravery and ingenuity from Harriet Whitehorn, author of the VIOLET series, for fans of COGHEART, NEVERMOOR and THE GIRL OF INK AND STARS.[goodreads]

This isn’t listed as Company of Eight, no 2, but it certainly follows the first, directly.  And to confuse me, the cover is similar in style to A Pinch of Magic, which is by somebody else entirely!

We are back with Cass, who is with people she considers family, in Minaris.  There is a map at the start of the book, which shows another part of the world from the first book, which was in the lovely warm Islands.  This time we go north!

Harriet Whitehorn’s style of immersing you in the landscape continues to delight. Now it’s warmth and furs and icicles and snowstorm in dark brooding forests.  Not all the snowstorms are real… There is a magician at work in a land where great magic has been outlawed. Fortunately, Cass is a rarity, a person who does not see magical tricks and is therefore immune to most tricks.

This is a beautifully constructed world which builds together well.  The story has twists and turns and adventures just right for most middle grade readers. I should warn, however, of a death of a major character. This is sensitively handled in that we see Cass’s grief and how she handles it, and indeed some time is spent dealing with the aftermath.  On balance I think it still fits in MG.

It was a joy to read and I throughly recommend it.  But it might be helpful to read the books in order.

Book Review | The Conspiracy of Magic by Harriet Whitehorn