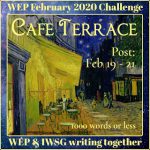 Cafe Terrace – what a gorgeous badge. As soon as I saw it I had the setting for my story – it took a while longer to develop the plot!

This is my entry for this month’s WEP+IWSG flash fiction.  Checkout the process at the WEP site.

The word count is just over 750, and gentle criticism is welcome.

Two Petits-pains at the Cafe Terrace

On the way down from Paris we stopped in Lyon, and climbed the cliff to the magnificent chateau. The Saone joined the Rhone and we followed them to Avignon. Sur le pont I danced in my head as far as the crumbling masonry, fenced off for health and safety. As if any of the tourists would risk their lives on that heap of rubble over the thrusting waters so far below.

Yes, they did, according to the notice displaying a ‘note of a tragedy’ from the local paper.

Was it coming south, to the Midi, that infected the brain with some sort of madness?

Was there something in the air—other than light, warmth, and a feeling of freedom?

Ever since college I had imagined this trip. The footsteps of my hero, seeking out his views, maybe even daring to make my own representations of them. Could I match those wayward cypress trees? Would the sun oblige by shining in the right place at the time I could get there?

“I’ve had enough, Arlene. If you don’t want to go back, I’m going by myself.”
Hector and I were sitting in a cafe, or rather, on the terrace outside, when he made this announcement.

“I thought you were as keen as I am to see where van Gogh got his inspiration.

“I was, and I have. It’s lovely scenery. I’m ready to go back. Darned flies.” He punctuated his grumble with an accurate swat at a mosquito which had had the temerity to land on his arm.

I didn’t see a squashed mess, so assumed it had escaped. “Well, I suppose the marshes do mean there are flies about. It’s quite difficult to eradicate them without poisoning the biosystem, I believe.”

“To hell with the biosystem, it’s my blood I care about. They can’t have it.” He slapped the back of his neck, then whirled a beautifully laundered cloth napkin around his head.

I wanted to comment on our responsibility for restoring the biosystem. It was better to keep quiet. He’d go on as long as he wanted without me stoking his fire.

We sat in silence looking at the view of the street. Nondescript, really. A few faded geraniums nodding from windowboxes in the Juliet balconies. Some laundry strung out to dry, even in this day and age. Charming, but characterless. Well, not really less, but definitely not full.

“This place has all the charm of a railway shunting yard.”

Hector sometimes surprised me. He’d been very keen on railway shunting yards in his youth. But then, we all change as we grow older.

Van Gogh certainly did. What a change! From a young man who just wanted to be a painting pastor, to one of the maddest and most brilliant painters of the fin de Siecle. Practically the inventor of Post-Impressionism.

I had fallen in love with his work when I was a teenager. I had a few more pictures I wanted to see in real life yet. I said as much.

“There’s this view of the aqueduct—” I showed him the postcard I’d brought with me “—which I think will take most of the day to reach unless we hire a car. And the room at Anvers, the hospital, and the Van Gogh museum. What do you think?”

He tapped away at his phone and announced a train leaving Arles soon to connect with the TGV to Paris. He’d be there by eight o’clock. ‘Just in time for a good French dinner,’ he added. He continued tapping, then announced a reservation at the hotel we’d stayed at on the way down.

‘So.’ His finger paused over his screen. ‘One ticket or two?’

I looked up and down the street, drank in the peculiar smells of southern French cities, and thought of the Camargue, and wheatfields, and cypress tress against lurid purple skies.

He pressed his phone, watched the screen, then put it into his pocket. He finished his drink and stood up. ‘There’s another train in the morning if you miss this one. I’ll get the Eurostar tomorrow afternoon. You can catch me at Gare du Nord.’

As he walked away, I wondered just why he thought I would catch him up at all.

I had a life’s dreams to catch up on.

By the time night fell, I had engaged a room above the cafe, and a part-time job as a waitress.

Now go and visit more stories inspired by this prompt!