The Fall of Onagros has been on my TBR list since March 2013. That’s more or less when it was published. If you remember, I used to prune my list on a thing called Down the TBR hole, which I gave up on eventually, although it’s not a bad idea.

When I considered this book, I said I’d heard good things of it, and I’d loved Marian Allen’s Turtle Feathers, so I was keeping it.

What a wise decision!

The Fall Of Onagros (SAGE trilogy #1) 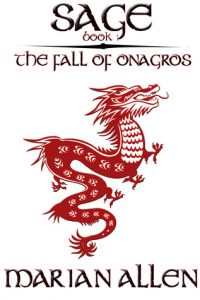 Usurper. Lost Heir. Runaway bride. Land on the brink of civil war. All so familiar, until Tortoise — the Divine Creature who ignores the rules of right and wrong — challenges his fellow divinities to meddle.

Suddenly, children targeted for murder are adopted, swordsmen turn into blacksmiths, and none are reliably who or what they seem. The four Divine Animals are afoot: Tortoise, Dragon, Unicorn, and Phoenix. Hold on tight.

Book 1: The Fall of Onagros
In the first book of the SAGE trilogy, a legacy is lost, a woman vanishes into thin air, wisdom is found in unexpected places, and a man hopes to defeat a tyrant with tall tales and gossip.[goodreads]

It’s a long time since I’ve read a fantasy genre book as good as this.  It took me away from my disappointment with the genre and fed a whole new life into it.  The energy and invention of Marian Allen’s prose is something wonderful.

People in this world have long names. You know what I’m like with names these days. I got used to one set of people, then we were with another set. But it started to make sense. All these vignettes started to twirl together. Then they started to backtrack. A narrator appears: how I love narrators! I would have loved it if I’d got Willoughby telling such wondrous and allegorical tales! There are so many people whose stories mix into this epic world, that you’d think I’d lose track and throw it down in disgust. Not a bit! They sing to you of where they fit, where they belong. So many sides of a story told in so many wondrous ways.

And the descriptions! I tried not to highlight particularly beautiful passages on every page. Never distracting, always picturesque.

Biddi’s hen called attention to herself by leaping up and clucking a chicken-shout to the morning. Having announced the entrance of an egg with such triumphal fanfare, she lost her own interest and pecked about the tree roots.

The Fall of Onagros is book 1 of the SAGE Trilogy. Books 2 and 3 are now firmly ensconced on my TBR. And to think it’s taken me since 2013 to read it. Magical, wonderful, clever, witty and extremely moreish!