The Graveyard of the Hesperides has been on my TBR for ages. The book has been on my shelf for nearly as long. So when I unpacked it, I put it on my sofa instead of into the bookshelf. That seemed to work! It’s the fourth of Lindsey Davis’s Flavia Alba series.  Flavia Alba is adopted daughter of Falco, and you know I’ve read all twenty of his stories! This series is now up to eight, so I’ve some catching up to do.

The Graveyard of the Hesperides (Flavia Alba #4) 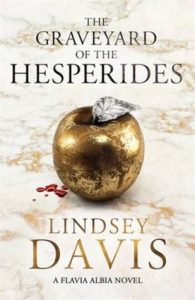 In first century Rome, Flavia Albia, the daughter of Marcus Didius Falco, has taken up her father’s former profession as an informer. On a typical day, it’s small cases—cheating spouses, employees dipping into the till—but this isn’t a typical day. Her beloved, the plebeian Manlius Faustus, has recently moved in and decided that they should get married in a big, showy ceremony as part of beginning a proper domestic life together. Also, his contracting firm has been renovating a rundown dive bar called The Garden of the Hesperides, only to uncover human remains buried in the backyard. There have been rumors for years that the previous owner of the bar, now deceased, killed a bar maid and these are presumably her remains. In the choice between planning a wedding and looking into a crime from long ago, Albia would much rather investigate a possible murder. Or murders, as more and more remains are uncovered, revealing that something truly horrible has been going on at the Hesperides.

As she gets closer to the truth behind the bodies in the backyard, Albia’s investigation has put her in the cross-hairs—which might be the only way she’ll get out of the wedding and away from all her relatives who are desperate to ‘help.’ [goodreads]

I nearly read this out of order, as I remember discovering Flavia was married when I started to read The Third Nero. This is the one with the wedding in it. If you are at all allergic to weddings, don’t read this book. If you think they are necessary, and a chance for a knees-up, then come and find out what’s involved in an Ancient Roman one. But, if you are sensible, don’t discover several bodies and set out to solve their appearance (or disappearance of their owners) five days before said wedding.

Like all Lindsey Davis’s books, this is so settled in Ancient Rome that you can smell the ordure. There was plenty of it, especially in the less salubrious parts that Flavia hangs out in. It makes her pa’s old apartment look like paradise. Although I like the way she concedes that dross you’re used to is far less offensive than other people’s dross. In the course of solving her problem she encounters augury readers with their own line of carefully tended sacrificial animals (remains to be disposed of after entrails read), mule droppings by the ton, sordid brothel beds by the hundred, and cooking you might be best to avoid.

The problem is dead bodies several years old. I was forever puzzled by just how long this was, based on clean state of the pile of bones discovered in the tavern’s garden, making it more like a graveyard. The clues are many, and yet few.  I was disappointed that Flavia missed something blindingly obvious (to me) several days before she realised. Was this clue placement retrospective, to make it more obvious to the reader? Or was it intentional so the reader felt superior to Flavia. I found it irritating, and docked one star as a result.

Other than that, the Graveyard of the Hesperides is superb, fast-paced, and somewhat lightweight. But who cares, when there’s a wedding at the end of it? And pay attention to the dates, they may help you in quiz questions.

Book Review | The Graveyard of the Hesperides

2 thoughts on “Book Review | The Graveyard of the Hesperides”