A Girl Called Justice is for middle graders who like a good mystery. And Elly Griffiths (Ruth Galloway series, Brighton Mysteries) is READING IT ON FACEBOOK!  She started 1st May, with the aim of finishing it May 14th when a sequel is due for publication.

So I’m reviewing it as an audiobook, because, well, why not!  It was also on my TBR so it’s counting in my reading challenges too. Thanks, Elly!  You can catch up on this (and other books Elly has been reading to us since lockdown started) on her Facebook page. 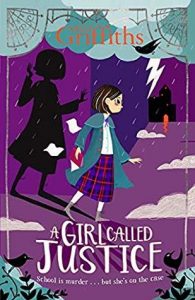 Missing maids, suspicious teachers and a snow storm to die for… For a fearless girl called Justice Jones, super-smart super-sleuth, it’s just the start of a spine-tingling first term at Highbury House Boarding School for the Daughters of Gentlefolk. For fans of Robin Stevens, Katherine Woodfine and Enid Blyton.

When Justice’s mother dies, her father packs her off to Highbury House Boarding School for the Daughters of Gentlefolk. He’s a barrister – specialising in murder trials – and he’s just too busy to look after her alone.

Having previously been home-schooled, the transition is a shock. Can it really be the case that blondes rule the corridors? Are all uniforms such a charming shade of brown? And do schools normally hide dangerous secrets about the murder of a chamber maid?

Justice takes it upon herself to uncover the truth. (Mainly about the murder, but perhaps she can figure out her new nemesis – the angelic Rose – at the same time.) But when a storm cuts the school off from the real world, the body count starts to rise and Justice realises she’ll need help from her new friends if she’s going to find the killer before it’s too late …[goodreads]

This is a story of a traditional nature: an ancient boarding school where the teachers were pupils themselves – and the servants, too, although this is slightly odd. Why did they go to this exclusive school anyway? I ask this question, because Justice’s continual questioning gets to be a habit. She was told never to take anything at face value, and she doesn’t! The school is nicely in the middle of nowhere (Romney Marsh), and the era is the 1930s.

Just the sort of setting for a girl with brains to get involved in a good murder mystery!

And this is a good murder mystery, albeit for young readers.

There is a question in some countries as to whether death is allowed in MG books. In Europe we tend not to have a problem with it, as long as it is the tradition of such crimes – no gory details, and the focus on the baddie, not the victim. Teen angst hardly raises its head, save for the swooning that goes on over the French master, since he’s about the only male around. The caretaker doesn’t count. This swooning is accurately portrayed, since I remember the swooning that went on over our Latin master. Our music master survived without it, but then, he was ancient! All the problems of small groups of girls crammed into a closed environment rear their ugly heads. Beauty is definitely not accompanied by intelligence. And I never did understand the game of lacrosse, which is something I have in common with poor Justice.

Elly Griffiths has a lovely way with descriptions, clues, hints and red herrings. She also has an excellent line in cliff-hangers. Since she was reading one chapter at a time in the main, there were several times when she shut the book, and I thought ‘nooooo!’ But I had to wait till the next day.  It became the highlight of my day, albeit partly because some of these days were pretty rotten. I commented on one of them, and she kindly sent me ‘Cathbad-like thoughts’ to buoy me up. Cathbad being the druidic friend of Ruth Galloway. I appreciated that.

A delightful tale, well read by the author, which takes you back to another time and place. I’m ready for the next in the series.