Vista is Sue Vincent’s prompt for our #Writephoto inspiration this week. Here’s the photo she gave us:

I confess I’m fairly sure I know where this vista is. There are several posts on Sue’s blog where I know where she is (not just because she tells us!). It’s the part of the country that I strayed into for book 5 in my Princelings series… the Hampshire-Wiltshire-Dorset triangle that my parents and much of the rest of my family have lived in since the early 1970s.

I based Castle White Horse there, along with Castle Deeping (closer to the South Downs National Park over Fareham way), and Castle Forest (in a slightly relocated New Forest setting). The area is littered with figures cut into the sides of hills, revealing white lines against the green turf, white horses, giants, and more.  And my hero, shy, nervous Humphrey, walks these tracks in his exhaustion, in his desolate need to find a new home, and not be an outcast. 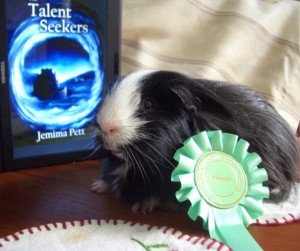 Humphrey is based on my guinea pig, and all my books are on special offer at Smashwords this week, in honour of Guinea Pig Appreciation Day on Thursday.  Full details then 🙂

For now, I have a 500 word excerpt for you. Humphrey and his friends left White Horse in a rush when there was a security alert at the three-day festival, and everyone was to be issued with a sash showing where they came from. Difficult for these outcasts… and Humphrey is desperate to listen to the stories to be told at the Narrathon, so he’s returning.

Humphrey’s tired feet found a path cut into the side of the turf-covered hill. They followed it without his knowledge.  He had travelled to White Horse some days ago – he couldn’t work out when – but had left yesterday evening.  Now he was going back there again, even though he didn’t really know the way.  He knew it was south, and across these grassy hills.

The path had strange twists and turns in it, and now he was on a downhill stretch. It rounded a bend and stretched away up the hill again.  Humphrey stopped and looked up the hill.  He was standing at the bottom of a loop in the path that continued up, then across the hillside, down and up again, round a bit, then out straight; it then turned a corner and came back a little higher up.  It makes a drawing or pattern on the hillside, he thought and laughed at himself for following it blindly.  He turned his back to the pattern and looked downwards to fields in the distance.  There were tents on the fields, and flags hanging limply, strung between naked trees. To the left, silhouetted against the wintry sun, was a castle.  He hoped it was White Horse.

He sat and stretched his feet out in front of him.  It was good to rest awhile.  He dropped his head and let his body relax.  Immediately his brain returned to the problem that had been bothering him during his journey.  What was he going to do when he got to the castle?  How was he going to get in?  He imagined himself talking to the security guards on the gate, explaining that he’d been away for the night but had come for the Narrathon.  Would they expect him to have a sash already?  What would he say?  He’d never had to talk to persons like that before.  He thought of Betty and Freya and what they said to important people.  He realised that they hadn’t spoken to security guards, only to ledger clerks and similar people.

The more he thought about this, the more terrified he became.  Maybe he should go through his secret passage.  But then he wouldn’t have a sash.  How would he get one? He’d have to talk to the security guards.  They’d want to know why he was inside without one. It was impossible, Humphrey thought.  He ought to turn round and go back.  But he did want to go to the Narrathon so much.

He woke and shook himself.  The sun was as high as it was going to get, and if he didn’t make up his mind he’d miss the Narrathon, and that would make this whole thing a waste of time and effort.  Maybe it doesn’t matter if you miss the Narrathon, a small voice inside him said.  No, said a bigger one.  I want to see it!

He stepped boldly from the path and headed to the castle.

And that’s the point where Humphrey and the reader meet Willoughby for the very first time in the books.

Willoughby turns out to be one of the most important characters, and gets his own book at number 7 in the series. He’s pretty much indispensable from then on! Willoughby wasn’t even my guinea pig, but my editor’s!

#writephoto for mid-July | Vista and the Talent Seekers