Umbrella Mouse to the Rescue came to me from the publisher via Net-galley early in the year, when it was scheduled for publication around June. I saw a new date for July and one for September, so I’m publishing the review now to cover all bases. It took forever to be listed on Goodreads, so my reading dates there are guesswork. I think quite a few books have had their publication dates changed as a result of the lockdown. Not so for indies, though… maybe the big launch push is more important to sales in the trad published world.

This is a sequel to the well-regarded Umbrella Mouse, which I had heard good things of, so I was happy to receive an ARC.  Thank you; I hope I kept up with the date requirements! 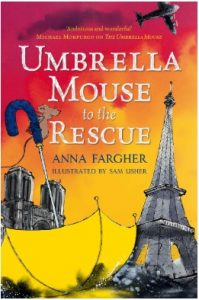 A timeless tale of courage, friendship and fighting for what you believe in, Umbrella Mouse to the Rescue is the eagerly anticipated sequel to Anna Fargher’s award-winning The Umbrella Mouse, based on the true stories of the heroic animals caught in the conflict of WWII.

Young mouse Pip Hanway is in France as she continues fighting for the French Resistance group Noah’s Ark: a secret gang of animals operating beneath the feet of human soldiers, whose aim is to liberate France and secure the victory of the Allies. Determined to reach her ancestral home of the Umbrella Museum in Italy, Pip hopes she can find long-lost family and a home. But as Pip makes the perilous journey through occupied territory, she soon realizes that danger comes from all sides and that the enemy is all around, and she does everything she can to fight for her friends.

Beautifully illustrated by Sam Usher, Pip will take you on an incredible journey through a war that reaches even the smallest of creatures. [goodreads]

If you haven’t read Umbrella Mouse, you don’t need to worry.  You’ll catch up with the setting very quickly, and I suspect may not learn too much more of the first story, although you may miss some fun.

Pip is a mouse, who lived in an umbrella shop in London. She escaped, clutching an umbrella, during the Blitz. She’s now an orphan, making her way to relatives in Italy. Not an easy journey for anyone during World War II. I’m intrigued by the premise in the blurb that it’s based on true stories of animals during the war, since I don’t believe there is any evidence of an animal resistance gang!  Be that as it may, it’s a lovely story, and a good way of introducing younger readers to the real dangers and horrors of life in an occupied country during a war.

There are been debates as to whether middle grade kids really like animal protagonists, and school librarians (mostly in the US) say they don’t. I wonder why there are so many animal heroes in Europe, and the genre does not seem to be dying down. Is it simply that we were a field of war, therefore the approach is different?

The story itself is excellent, full of twists and highly imaginative turns. Some of the Parisian bits bear a considerable resemblance to The Deptford Mice but when you’ve got animals hiding under a city, that’s kind of inevitable. The division of animals into support for the Allies and the Axis could lead to some interesting debate. Do the animals live up to their stereotypes or not?

Altogether a very enjoyable and imaginative story, told simply and ably for younger middle graders (age 8 and up, I’d say). I may resist reading the first, and a likely third, though it’s a function of my age, not the books!

One thought on “Book Review | Umbrella Mouse to the Rescue”