Darkness is today’s #writephoto prompt from Sue Vincent. The picture is below. I took my inspiration from the word rather than the picture of dark roiling clouds over a rolling meadow. As soon as I saw the prompt I thought of tunnels.

Tunnels in the Princelings Books

Tunnels have always featured strongly in the Princleings books, mainly because guinea pigs love tunnels! They became a feature of the Realms, connecting the major castles… That’s interesting, because the tunnel to Castle Marsh was started, but never finished, before Fred and George connected it up. Or had the entrance been blocked up by a former king? Hmm, a whole new storyline opens up!

The last book in the series is nearly finished. I just have to do the chapter illustrations, and Dani has to finish the device on the cover, but the latest draft included something spectacular and it’s going to be fabulous! I keep thinking of things to improve in the manuscript rather than do the pictures. I’m not confident I can do them, that’s why. Procrastination once more…

Back to the prompt… I thought you’d like an excerpt from the new book today. Jasmine (Fred’s young but very sensible daughter, who takes being a princess very seriously) falls down a hole in the woods, with her cousin from Castle Buckmore, Princess Liska. It’s about 1000 words—I had to take out a couple of paragraphs that are a major spoiler, and then it made more sense to include the longer introduction to the tunnel bit 🙂

Darkness falls over Jasmine and Liska 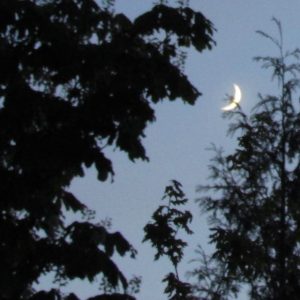 Jasmine tried to ignore the tears streaming down her face, the soreness of her hands, the aches and pains in her body. She grabbed hold of the roots sticking out of the earthen wall again, fought for a purchase with her right foot, and dragged herself upward, hoping against hope that she’d manage to get further up before the roots gave way like the last ten had. The earth gave way under her left foot, leaving her dangling from her hands. One root was slipping through her already scorched palm, and she fought desperately to find another place to hook with her foot.

In a shower of earth and sticks, she fell back down, landing on her side next to Liska.

“We’ll never get out,” Liska said with that defeated tone she’d had for the last hour.

“We must keep trying to find a way. If we can’t climb out, then we must think of another way.”

Jasmine lay back and stared up at the hole they’d fallen through. Even if someone had sent out a search party, they would never be found in the darkness. “We may be here till morning, then. We must try to keep strong. I don’t suppose you have a water bottle in your bag?”

“No.” Liska sighed. “I think I would have drunk it all by now, anyway.”

“You’d have realised you needed to conserve it. You’re clever like that.”

“Let’s play a game to pass the time. I’ll think of a person we both know, and you have to guess who I’m thinking of, but only using questions I answer yes or no to.”

Liska sighed. “Do we have to?”

“Well, what else can we do? I don’t want to sit here and do nothing.”

“I want to go home!” And not home to Castle Marsh, but home to her parents, to Castle Buckmore, to all her friends there. To somewhere they didn’t have people blowing up her birthday party, or crammed in to every part of the castle. To home where she had a nice room and servants to do everything for her; where her parents had lovely rooms and sitting rooms, and there was a nursery for the children—not where all the children in the nursery were up one end of the small hall while the craftworkers were at the other. To a place with space for a proper market, not crammed into a small square with shacks around the edge to house more people.

“So do I,” admitted Jasmine, thinking how lovely it would be to be cuddled up to her father, listening to her brothers bickering every evening in the room next to hers. All the things that irritated her about them melted away. She loved Castle Marsh and the way her father had welcomed everyone in, and made sure there was somewhere decent for them to live, however cramped it made the rest of the castle’s facilities. But if she stayed here, she wasn’t going to get back to them. And how would anyone ever find them?

They wouldn’t find them, even if they knew she’d headed for the lightning tree, and there was little chance of that, except that they might work out she hadn’t gone in any other direction. The path they’d taken to the shack was hardly visible, and there was no inkling of the shack from the main track. And she couldn’t remember whether they’d run back along the path when they’d fallen in, or just run straight out from the door into the forest. In fact, even if she climbed out, she wasn’t sure she’d find her way to the marsh.

“Unless we can see the moon,” she said to herself.

“Oh, I was just thinking of whether people might find us, and then I wondered if we would find our way back if we managed to climb out. Then I remembered the moon should be more or less full, so that might help us find our way.”

“We’d be lost. And we can’t get out, so we’re going to die.” Switching from anger to fear, Liska burst into tears again. It was hopeless.

“Well, let’s have a nap, and see if we can think of anything when we wake up.”

Liska sniffed, but said nothing.

The moon was out, and shining diagonally onto the underside of the hole. Shadows of branches made patterns on the earth. Jasmine turned over, and banged a branch that had been sticking in her side. It bashed the side of their hole, and she heard a crumbling sound, then a thud of earth cascading over her body. She scrambled out from under it, calling out Liska’s name.

“What?” Liska said, drowsy with sleep.

“The cave’s falling in!”

Jasmine scraped the rest of the earth away, and felt open space where the earth wall had been. There was an odd smell coming up from the ground now. Old socks and mushrooms, maybe, she thought.

“I think it might lead somewhere. I’m going to crawl in.”

She vaguely heard Liska trying to stop her, but her head was already down the hole, which seemed to go over a ledge then drop down some more. Feeling above her, the roof of the tunnel just continued at more or less the same level.

She went a bit further, and slid down a steep earth slope to firm ground. “I think it’s a tunnel!” she called.

There was no light, but her eyes had become used to the gloom of their trap. She felt walls on either side, including the one connecting to the trap, but a sense of distance in both directions.

“I wonder if this is the old tunnel connecting Marsh with 7H,” she called. “Liska, we can follow it home!”

That brought Liska through the earth fall to the edge of the larger tunnel. “Really? You’re brilliant!” She tumbled down the earth slope and rolled onto her feet next to her friend.

“Er…” Jasmine had lost any sense of direction, and said so.

“Well, the earth slope was on the left side of the cave as we were sleeping, wasn’t it. I felt we were sort of facing the way we’d fallen in.”

“Oh, the moon! It was shining above our heads, because the light was casting shadows on the other side of the hole!” Jasmine sounded elated at having thought it through.

“So, this way is the direction of…the moon?”

“Yes, it must be. Roughly, at any rate. But then, that would be the way to the sea, unless we slept a very long time.”

Jasmine thought some more. “Well, even if it was late in the night, the moon would still be this side of the hole, so this is still the way home.”

This will be the last in the series, so if you want to catch up, I suggest you take a look at the previous ebooks in the Smashwords sale, which ends 31st July. You can see the sale prices of all my books on that page if you scroll down.

You can pre-order Princelings Revolution at a very special price at iTunes, B&N, and Kobo. It’s also on pre-order at Amazon!

Anyone can join in Sue Vincent’s writephoto event. Each Thursday at midday UK time she posts a picture and a prompt.  Make what you like of it. Poems, prose, stories, ideas, pictures, whatever. Post to your blog or online space anytime till the next Wednesday and link back. Sue reblogs several blogger responses throughout the week.

#writephoto | Darkness – an excerpt from Princelings 10

One thought on “#writephoto | Darkness – an excerpt from Princelings 10”