Humankind came along on Net-galley just as I was feeling particularly down over the state of politics and society. It promised a reassessment of our outlook on why people are what they are. I can best say it gave me substantial food for thought. It certainly gave me an uplift during the Covid-19 crisis. 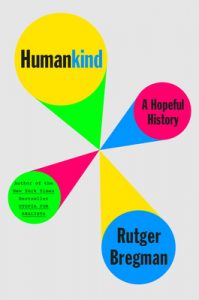 From the author of New York Times bestseller UTOPIA FOR REALISTS, a revolutionary argument that the innate goodness and cooperation of human beings has been the greatest factor in our success.

If one basic principle has served as the bedrock of bestselling author Rutger Bregman’s thinking, it is that every progressive idea — whether it was the abolition of slavery, the advent of democracy, women’s suffrage, or the ratification of marriage equality — was once considered radical and dangerous by the mainstream opinion of its time. With Humankind, he brings that mentality to bear against one of our most entrenched ideas: namely, that human beings are by nature selfish and self-interested.

By providing a new historical perspective of the last 200,000 years of human history, Bregman sets out to prove that we are in fact evolutionarily wired for cooperation rather than competition, and that our instinct to trust each other has a firm evolutionary basis going back to the beginning of Homo sapiens. […]

The ultimate goal of Humankind is to demonstrate that while neither capitalism nor communism has on its own been proven to be a workable social system, there is a third option: giving “citizens and professionals the means (left) to make their own choices (right).” Reorienting our thinking toward positive and high expectations of our fellow man, Bregman argues, will reap lasting success. Bregman presents this idea with his signature wit and frankness, once again making history, social science and economic theory accessible and enjoyable for lay readers. [goodreads]

Over the course of my career, there have been several occasions when I have thought, ‘but people aren’t really like that’ in response to some well-established theory or other. Particular cases in point, several motivation theories, and the rational economic man.

In what seems a very long book (illusion: 20% is the Reference section), Bregman examines the evidence for the assumptions and beliefs that we are basically evil, and need to be trained, honed and coerced into doing anything. System by system he dissects the evidence, the root causes of our assumptions, and comes up with some basic truths. They are all too apparent in this world of Johnson-Cummings (the Machiavelli behind our so-called Prime Minister) and Trump and his cronies.

Put simply, there is a range of natural behaviour in which the norm is pretty nice, friendly and knows that co-operation works. There are extremes either side. So why are we stuck with an extreme rather than a co-operative society?  Bregman answers, supported by masses of referenced stories and debunked research papers. People with a very high sense of self-interest lie to gain power. And they are ably assisted (through the ages, not just now) by self-serving journalists and newspaper owners, who know that sensational headlines best sell papers.

It’s a really good read. You will know or have heard of, at least some of these theories that shape our society. You will recognise yourself and your neighbourhood. Deep down, most of your neighbours are pretty nice, you think. If only you had the time to hang out with them and get to know them better.

There’s a huge amount of things I could say, could lift from the book, or could quote.  But the crux is, the newspapers have fed us the lies that politicians and rich landowners want us to believe. Thay way both can get richer and more powerful. The news is a drug, so get off it. More peaceful protests have succeeded in achieving real change than violent ones, but papers will only report violent ones. All the most celebrated research we have been fed showing how nasty we are has as dubious a background as the scandalous MMR vaccine/autism research. They’ve been fixed, in other words.

Why do I believe these things to be true, when I’ve just read them in a book? Because of the degree of detail the author has gone into. And yes, because it tallies with my own experiences. People are basically nice. Get to know people of different backgrounds, races, colours, creeds and preferences. Most of them are just as nice as you are. How the self-serving ones manipulate us into electing them into power is another story.

Some wise people I know always use a quote in their weekly newsletter: this week’s was particularly apt.

Jean de La Fontaine (1621-1695), French fabulist and widely read French poet of the 17th century, gives us much to think about this week. “Man is so made that when anything fires his soul, impossibilities vanish.”

Read Humankind: A Hopeful History by Rutger Bregman. It’ll help you feel better, if hoodwinked throughout the generations. It might fire your soul, too.