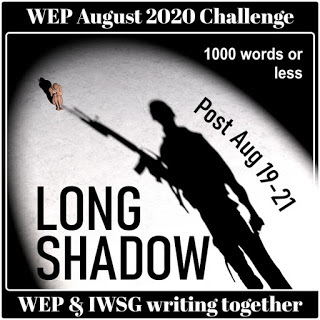 Long Shadow makes me think of a shadow I always used to imagine was going to look around the corner of the landing and look at me in my bed. But the picture isn’t right for a story about him… the Dementors are very close to my imagined monsters. I wonder if JK Rowling had the same dreams?

This of course is my WEP+IWSG flash fiction for August. I enjoy the prompts, and also not having the pressure of doing them every week! This one runs to 500 words, and is inspired by the little boy in a house near the back of my garden, who seems to end every day in screams of frustration. Lockdown is hell with young children, even when you have a garden to let them loose in. If that’s you, you have my sympathies. But it might not be him, you know!

Bobby squatted down in the sand pit, digging with his plastic spade, making a new run for his marbles. The sun was harsh, he’d got his teeshirt and shorts on, and the floppy blue hat he liked. Mummy had spread suncream all over his arms and legs and face anyway, despite his protestations.

“If you can’t stay in the shade, Bobby, you’ll have to have suncream. And your hat. And you really should wear a long shirt. Stop squirming, you naughty boy.”

He’d managed to avoid the shirt, and now he was engrossed in a black beetle that emerged from his hole. It climbed up, struggling over a grain of sand that threatened to tip him backwards, and scuttled away.

“Ow,ow,ow!” he yelled, standing up and pulling his shirt away from his back as the hot water reached his skin.

“Scaredy cat!” his sister said, sticking out her tongue at him, hiding the kettle behind her back.

“You did that on purpose!”

“Liar!” Her eyes were wide-eyed and innocent. He didn’t understand how his mother never saw her hard cruel eyes. She turned away and skipped off towards the shed. Bobby turned back to his pit, wondering what torment she’d got planned for him next. There was no use complaining to his mother. She would just punished him for whining.

“She just wants to play with you,” Mummy said. “Get involved with her games more, don’t always be playing on your own.”

Bobby used to play games with her, before he understood what they were, and that he didn’t have to. Being tied up in the shed, and having earwigs stuffed down his shirt wasn’t too bad. But then she started exploring sticking them in his ears… he tried not to think of the time she put them in his mouth. Or the other things…

When he could stand it no longer, when he screamed and ran away, Mummy turned into Shouty Mummy for the rest of the day. Only if he was lucky did he get sent to bed.

The shadows there would get longer, too, but usually his friend came out to talk to him.

Sometimes it wasn’t his friend.

Sometimes it was the long shadow with the tall hat, who told him how his sister was going to get him the next day, and the next, and the next…

And sometimes it was the horrible long shadow with the round hat and the gun, who told him over and over again, how his father had died. Not a hero, like his mother said. Not fighting the enemy, or rescuing some kids from a house. He went out for fun with his mates and a landmine blew them to bits.

Then he’d cry himself to sleep.

But the next day, Bobby would return to the sandpit, or climb the tree, anything to keep away from his sister and her games.

A Plea for Help

If you host book tours or blasts or just fancy helping me with my next book launch, please leave a note below to help me launch Princelings Revolution through September through to November. Thank you!