I joined the Firefly Warrior Club Book Tour, and later realised it should be ‘warriors.’ Since I’d already set my link up to the host’s list, I left the post title as is!  Apologies to the author, but the rest of the title occurrences are correct (I hope).

It’s been a while since I joined an Great Escapes virtual blog tour, but as this is an MG book, I thought I’d do my best. The tour runs October 15 – 24, 2020, so this is the last stop.  Please visit the rest of the tour participants to see other reviews, interviews and excerpts from the book. I went for a review spot. 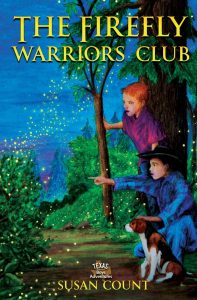 They chase a light and then it chases them.

When a mysterious light entices twelve-year-old Davy and his bothersome cousin, Anderson, into the woods, they discover the forest is alive with wonder. Firefly magic dazzles the boys, and they vow to save the insects from destruction.

Then a fire rages in the forest. Despite the cousins’ creative efforts to help the firefighters, the situation for the fireflies plummets from grim to dire. As the blaze consumes the fireflies’ habitat, the young warriors despair.

They enlist the support of the neighboring farms to protect and save the habitat of the magical treasures. If only there was—even one left.

This is a charming and action-packed story about two cousins on holiday at their grandpa’s ranch. Or maybe a ranch implies cattle and farming includes other crops?  I’m not sure.  It’s Texas, and I have limited experience of the state, so apologies for my ignorance. Then again, other readers may be even less travelled than I am, so it’s a fair review!

I was really impressed with the amount of environmental information packed into this story. It helps that Davy, the twelve year old, is a firefly nut and wants to be an entomologist when he grows up. He’s not short on practical and problem-solving skills either. Although I did wonder about the effect of running the water from the well into the lake for the firefighters. Would it suck all the groundwater up and leave everyone else’s wells running dry?  Well, Texas is bigger than the whole of the UK, so maybe it’s not a problem. But the fireflies, other bugs, and animals, are mesmeric. Plus, getting farmers to farm for wildlife with tax rebates/subsidies is a great policy for people of this age to understand and spread about.

I haven’t said much about his cousin Anderson, who’s a fairly useful person to have about when you’re lost in the forest. I had trouble believing he was ten. I wondered later if he was somewhere on a spectrum.  My friend’s six year old behaves in a very similar way to Anderson. Maybe it’s normal for Texas boys.

Altogether a good yarn for boys, with not a woman under fifty in sight. Some rather long sentences might put reluctant readers off, but the charm of the adventure will probably get them through it.

Susan Count writes for the joy and entertainment of young readers. She is a best-selling, award-winning author of the Dream Horse Adventures Series. Susan confesses to being overly fond of brownies, and horseback riding on forest trails. The Firefly Warriors Club was written for her three grandboys who wanted an adventure of their own. What’s a fairy grandmother to do, but wave her magic pen and create.