The Zig Zag Girl was the not the only Elly Griffiths in the library when I visited on a whim after getting my flu jab. The doctor’s surgery is in the same complex. But, as all the titles on the regular shelves I’d read (and mostly own) I passed the Large Print section and picked this one up.

I’ve been suffering from a developing cataract since the start of the year. The optician referred me in March, the week before lockdown. I didn’t even have a GP to take my referral letter to. By the time they were starting to do cataract ops again, I faced a wait till next spring, so I’ve gone private. My operation is on December 17th, and I may not be commenting for a few days after that. But then it’ll be Christmas! With any luck I’ll be able to type without so many typos once the op is done and I have binocular vision again.

Large Print books are wonderful, especially in autumn light.  I recommend them!  I can’t find the cover of the edition I read, though. 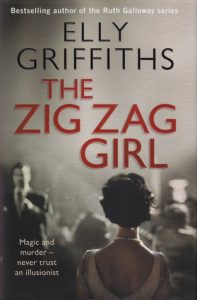 When the body of a girl is found, cut into three, Detective Inspector Edgar Stephens is reminded of a magic trick, the Zig Zag Girl.

The inventor of the trick, Max Mephisto, is an old friend of Edgar’s. They served together in the war as part of a shadowy unit called the Magic Men.

Max is still on the circuit, touring seaside towns in the company of ventriloquists, sword-swallowers and dancing girls. Changing times mean that variety is not what it once was, yet Max is reluctant to leave this world to help Edgar investigate. But when the dead girl turns out to be known to him, Max changes his mind.

Another death, another magic trick: Edgar and Max become convinced that the answer to the murders lies in their army days. When Edgar receives a letter warning of another ‘trick’, the Wolf Trap, he knows that they are all in danger… [goodreads]

Post-war Britain is not an exciting place. In 1950 there were still several things being rationed, including sugar, although a sense of optimism may well have been around for those lucky enough to have survived with some sort of settled existence.

For the first part of the book I felt adrift, not knowing the characters—indeed, not liking the characters. I found Max Mephisto irritating and tasteless, and Edgar Stephens a bit wet (very 1950s description). And Brighton in 1950 was where my grandmother lived. Visits to see her were compulsory, although I didn’t become aware of that till later.  It all seemed depressingly familiar, and yet alien.

Given that this is the first Stephens & Mephisto mystery, maybe Elly Griffiths took time to hit her stride.  For the first time, I considered not finishing one of her books. I took a long break, but went back to it, and was well rewarded. The intricacy of the plotting raised questions in your mind about ‘who dunnit’ at every turn.  I’m pleased to say I did wonder correctly about the murderer soon after I restarted it, but as usual, having given you an insight, Griffiths then bowls you over with several more plausible villains disguised as innocent bystanders. You have to doubt your powers of reasoning.

The author captures the seediness of the theatricals and the atmosphere of both Brighton and Yarmouth (and of suburban London) with a fine eye. Thank goodness I grew up in the late sixties. If you are interested in the period, or simply want to add the rest of Elly Griffiths to your list, then read this book. I’m not sure I’m encouraged to read the rest of the series, though.

THE ZIG ZAG GIRL 'The author captures the seediness of the theatricals and the atmosphere of both Brighton and Yarmouth (and of suburban London) with a fine eye.' @ellygriffiths #crime #mystery Click To Tweet
Book Review | The Zig Zag Girl by Elly Griffiths