Three first in series books take up my review spot today.  One way of catching up with the titles read before the year ends.

These have all been on my TBR list for a while, and mostly from the excellent Storybundle.com collections. In Storybundles, someone curates a selection of books on a theme, you pay a set price for the first four, but if you choose to pay more over a certain point, you unlock up to ten more. Each bundle is different, and covers a wide range of genres and themes. I’ve just bought a ‘noir’ themed one!

Reading a first in series is dangerous. It only leads to more of the series to add to the TBR. Mostly. 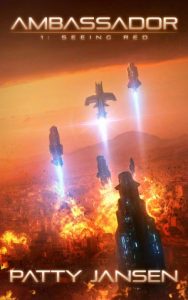 Young diplomat Cory Wilson narrowly escapes death in the assassination of President Sirkonen. No one claims responsibility but there is no doubt that the attack is extraterrestrial.
Cory was meant to start work as a representative to Gamra, the alien organisation that governs the FTL transport network, but now his new job may well be scrapped in anger. …
But he’s broke, out of a job and a long way from Earth. [see the full blurb at goodreads]

This gripped me from the start.  The opening is understandable, the development thrilling and the escape from Earth so brilliantly written I was on the edge of my seat.

Great beginnings tend to have a bit of a lull afterwards, but the world-building that went on more than made up for it.  This is a complex plot involving several alien worlds, with different physical characteristics and tolerances, and Jansen has built her universe superbly. So much so that I felt my attempts were a tad inadequate.  But the story developed into a fast-paced thrilling political intrigue, coupled with angst from the protagonist about his love life, moral standing and work capabilities, and I loved it. 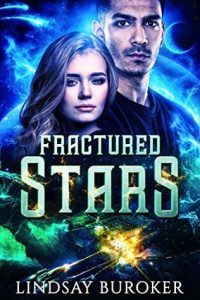 McCall Richter finds criminals, con men, and deadbeats better than anyone else in the empire.
…
When her ship is confiscated by a cyborg law enforcer needing to transport prisoners, McCall knows she and Scipio are in trouble. Worse, the enforcer’s pilot is a former bounty hunter and business competitor she beat to the prize many times in the past.
…
It’ll only be a matter of time before he discovers her secret. And then what? [read the whole blurb at goodreads]

I’ve read several Lindsay Buroker series, including some of her scifi ones, all of her Emperor’s Edge fantasy, and most of her Flash Gold steampunk. I’ve finally found one that didn’t match up to expectations.

Well, it did, as McCall is the usual Buroker heroine. I highlighted one paragraph that made complete sense to me as it explained my life problems. The enforcer’s pilot becomes the possible love interest or business partner, and the story progressed excitingly through the first two-thirds of the book. But I had a nagging feeling I’d read it before. Then when it got to a point of searching for someone for revenge, on a jungle planet, I knew I’d read that before.  I even checked all my Buroker reviews, and found what I was looking for in a review of a Ruby Lionsdrake book. This is not plagiarism at work, because Lionsdrake is the pen name for the more erotic Buroker output.

So I’m really disappointed that the stories are so similar. At least the love interest is slightly different from the norm. If you haven’t read her books, they are a good, fast read. But maybe I’ve read too many of them. 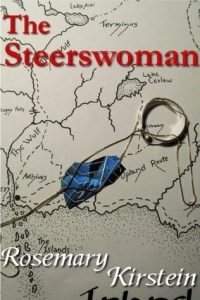 […] Steerswomen, and a very few Steersmen, are members of an order dedicated to discovering and disseminating knowledge. Although they are foremost navigators of the high seas, Steerswomen are also explorers and cartographers upon land as well as sea. With one exception, they are pledged to always answer any question put to them with as truthful a response as is possible within their own limitations. However, they also require anyone of whom they ask questions to respond in the same manner, upon penalty of the Steerswomen’s ban; those under the ban do not receive answers from the steerswomen.

In this novel, Rowan is a Steerswoman who is interested in some strange jewels which have been found distributed in an unusual pattern. These jewels are made of strange materials bonded onto metal. Some think that such jewels are magically produced.[goodreads]

Since most of the storybundles I get are scifi or spec fic, I was surprised to realise this was high fantasy. But I’ve not been reading much fantasy recently, so it’s a nice change. I think the blurb leaves something to be desired, but the book grabbed me from the start.

The Steerswoman is an intelligent person, deriving STEM knowledge from first principles. Travelling in the wilds where she might be set upon by bandits, or ruffians acting on wizards’ instructions, makes Rowan very self-sufficient. Even so, it never goes badly to have a travelling buddy who turns out to be a warrior. Rowan is dogged by several mishaps. Conclusion: someone is trying to get to her.

The delight in this book lies in the characters, the landscapes, the mental dialogues, and the outward repartee. And the writing.  Oh, and the plot hangs together nicely with as many twists as there are in Rowan’s travels.

In fact, I enjoyed it so much that I gave it five stars, and added the other three in the series to my TBR.  The only question is – how can this book have been out since 1989 and be so little known?

So there we have it: three books off my TBR – and six sequels added to it.  Sigh.

A #Storybundle of Book Reviews | Three first in series