Thief of Time is no 26 in the Discworld series, and last of five in a subset called Death.  Cheerful!

Unlike most of my friends (and probably most Discworld readers), I have a random approach to the order I read these in.  This is partly because I laboured under the delusion that I’d tried Discworld when I was much younger and didn’t enjoy it.  I finally worked out that I tried Gormenghast and didn’t like it.  Once I discovered my mistake (through the GMGR reading the Amazing Maurice and his Educated Rodents) I began on the journey through the world from the start i.e. the Colour of Magic, which I don’t seem to have reviewed.

This one I got from the library. I like supporting my local library. Maybe I’ll work through more Pratchett gems there. This one has played a crucial part in almost completing my Alphabet Soup Challenge as well as the Spacetime Challenge.  Well, it is an amazing timetravel book! 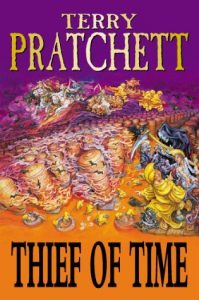 Time is a resource. Everyone knows it has to be managed.

And on Discworld that is the job of the Monks of History, who store it and pump it from the places where it’s wasted (like underwater – how much time does a codfish need?) to places like cities, where there’s never enough time.

But the construction of the world’s first truly accurate clock starts a race against, well, time for Lu Tze and his apprentice Lobsang Ludd. Because it will stop time. And that will only be the start of everyone’s problems.

Thief of Time comes complete with a full supporting cast of heroes and villains, yetis, martial artists and Ronnie, the fifth horseman of the Apocalypse (who left before they became famous). [goodreads]

I am not worthy to review Thief of Time. It is just SO good. For the first ten percent or so I was a little puzzled: lots of different scenes; no chapters, just a Tick! Funny names appeared that I might not remember, and the Rat of Death haunted Miss Susan, who seemed to be My Kind of Teacher. I got one quarter of the way through  it… and did something I haven’t done for years after that.  I stayed up till 2 am to finish it!

There are several parts in it that I wish I could highlight. The downside of a book v. a kindle copy. Lovely turns of phrases, and descriptions of time, how it works, and how the monks use spindles to balance it out where it’s not needed to where it is—I think.  Terry Pratchett’s philosophy of time is magnificent.  So complex and detailed.  How can one person bring all that out of his head? And then these Auditors turn up, non-people who exist in thought energy, but make the mistake of taking over human bodies and discovering they are limited by them, but oh, the taste of chocolate…!

Running through it all is a theme of Death (who rides a beautiful creamy-white horse), trying to bring the other horseman back together for a last Apocalypse.  Previous apocalypses have just been the end of the world as a person in a hamlet would see it, once they discovered they lived in the middle of an island. Then another once they realised they lived on a planet.

The conceptual elements that pervade Thief of Time are absolutely marvellous. I adored it. I suspect I may not find a Discworld novel better suited to my weird interests. Although my niece recommended me to Going Postal, so maybe there are even more delights awaiting me as I traverse the Pratchett universe. I seem to have been converted to Discworldaholism overnight.

THIEF OF TIME 'The conceptual elements that pervade this book are absolutely marvellous. I adored it. I have been converted to Discworldaholism overnight.' #discworld #spacetimereads #timetravel #weird Click To Tweet

I hope you had a lovely Christmas Day, and you are enjoying the seasonal celebrations of your choice. There will be two more book review posts during the week, before the year ends.  Happy new year to you and your loved ones.