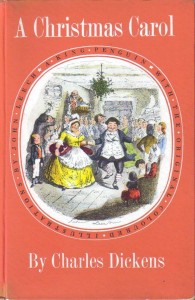 At the start of the year I had a number of classic books by Charles Dickens on my to read list.  I eventually took them off, but put A Christmas Carol back on to celebrate Christmas in the most traditional of ways.  It’s not as if everyone doesn’t know the story.  The numerous movies and adaptations for tv have usually done a great job of the characters, the mood and Scrooge’s redemption.

What took me aback was the amount of detailed description; flowing, deliberate, mellifluous description of Scrooge and his cold, barren existence, both in his house and his workplace.  Then it got into the story as we know it, Bob Cratchit, Nephew, spurned Do-Gooders and all.

I was captivated by the description of Scrooge, though:

Oh! But he was a tight-fisted hand at the grindstone, Scrooge! a squeezing, wrenching, grasping, scraping, clutching, covetous old sinner! Hard and sharp as flint, from which no steel had ever struck out generous fire; secret, and self-contained, and solitary as an oyster.  The cold within him froze his old features, nipped his pointed nose, shrivelled his cheek, stiffened his gait; made his eyes red, his thin lips blue; and spoke out shrewdly in his grating voice.  A frosty rime was on his head, and on his eyebrows, and his wiry chin. He carried his own low temperature always about with him; he iced his office in the dog-days; and didn’t thaw it one degree at Christmas.

I’ve taken care to punctuate it exactly as my 1954 reprint of the book (1946 King Penguin with the original illustrations by John Leech).   I wish I knew how I came by some of my books!

This to me is a revelation in description.  I hate those books that give us detailed break down of height, hair colour, eye colour etc of the protaganist.  This exposé of Scrooge pictures him in his character as well as his physique, and no-one has really made Scrooge look anything other than Scrooge when they have acted him.  Compare them, contrast them – it’s hard to do.  Yet this description brought him back as fresh as ever to me, seeing him as a new discovery.

The trouble is, that there are further paragraphs describing him.  All good, but probably not adding any more to our understanding of him.  Maybe of the scene? The other characters of the city?  Their interaction? Perhaps.

Earlier this week I read an excellent ‘Editing’ series on The Story Reading Ape’s website, and specifically on Description.  The guest writer cited Charles Dickens’ Bleak House as an example of description that was too dense to be read successfully by the modern reader.  Despite myself, I found I had indeed skipped some of the description of Victorian London later in this book, particularly when the Ghost of Christmas Present takes him on a walkabout (or maybe a fly-about).  I made myself go back and re-read, finding more delights in examples of jovial celebrations rarely seen on screen – the lighthouse keepers, for example.  But was it necessary?  Would it be acceptable in a modern book?  Probably not.  But one of the comments on the blog post was that Dickens was paid by the word, and A Christmas Carol started life as a serial in a London newspaper.  Filling the copy space and getting to a suitable climax at the end of the day’s published piece were probably in his mind as much as prose style.

What I find myself musing on, at the end of the book, is how relevant this story is to people today. We get so isolated in our cities and even our villages, minding our own business and being afraid of reaching out to others for fear of rebuff. Poverty and cold are not the prerogative of Victorian England.  The wealthy are wealthier than ever, the gap between rich and poor continues to grow.  What should we do if we feel stuck in the middle?  It is no more unsafe “out there” than it was in Dickens’ day.

When I first listed this book on Goodreads as ‘read’, I gave it 4 stars.  On re-reading I think it deserves more.  It is wonderful writing, as relevant as ever.  But I did skip parts of the descriptive narrative, so maybe it is 4.5 at best.  On the other hand, it makes me want to re-read more of Dickens work, especially A Tale of Two Cities and Great Expectations, both of which I remember with good thoughts.  No, it’s not a 5.  Let’s stick at 4.5. But if you haven’t read it before, do so, especially at Christmas time.

A Christmas Carol by Charles Dickens

Read as part of the Classic Childrens Book Reading Challenge.

I get a huge number of visitors reading this post, from all over the world.  Why not leave a message or click the ‘like’ button – if you liked it, of course!

5 thoughts on “Book Review: A Christmas Carol by Charles Dickens”