Well, I hope you had a happy Christmas or whatever you celebrate at this time of year.  As I read three detective stories during December,  Hercule Poirot’s Christmas, Voice of the Violin and A Great Deliverance, I thought I’d compare the three sleuths for your enjoyment.

Agatha Christie’s Hercule Poirot needs no introduction, surely.  Most modern audiences will be familiar with him as portrayed by David Suchet on television, or by Peter Ustinov or Albert Finney in film (among many others).  I can’t remember reading a Poirot mystery before, although I read a number of Agatha Christie books in my teens and twenties.  Elizabeth George’s Inspector Lynley, introduced in A Great Deliverance, may be less well known, although Nathaniel Parker  played him in the UK TV series and is well-known in the US.  I don’t know whether Salvo Montalbano has made it to the US, but Andrèa Camilleri’s Sicilian detective has been a great success in the UK, lightening our Saturday evenings in between the very much darker crime series from Denmark and Sweden.  Sicily or Sweden in winter… no contest!  I read the Lynley mystery for my bookclub, and the Montalbano was the fourth I’ve read (some have been reviewed here) as I got them for a Christmas present last year.  Maybe my review is biased as I like Montalbano on TV best of the three. 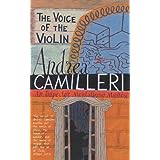 In Voice of the Violin, Montalbano is pre-occupied with the question of adoption of a young boy he rescued in an earlier book.  There are threads that run through the Montalbano books, like his long-distance relationship with his girlfriend and his rivalry with his number two, that add to our understanding of his character without any description being needed. The crime is discovered by accident, and needs to be discovered officially before he can investigate, and then local politics take over and he is ousted from the investigation, to the outrage of his team. The Sicilian detective world is one where women are either victims or witnesses, mainly young and beautiful, whether elegant or peasant, unless they are old, in which case they are often venerable and wise.  Or exceptionally good cooks.  I should say that food is a major feature of these books.  You’d better enjoy seafood and pasta!  A couple of recurring female characters are smart cookies who usefully prod Salvo in the right direction.  In this story we are mired in a case of inept carabinieri falsifying evidence until something that has nagged Montalbano right from the start is suddenly propelled back into his brain thanks to the wise lady and her weekly violin recital.

I enjoy the Camilleri style, the scenery is gorgeous, the characters just daft enough to avoid being total caricatures of dim policeman, and the more I read, the more I enjoy them.  I stayed up late to finish this one as I didn’t want to put it down.

With Elizabeth George’s book, A Great Deliverance, I had to force myself to return to it.  If it hadn’t been a bookclub read I’d have given up in disgust.  Wading through the first 200 pages, full of pretentious prose interspersed with bigoted descriptions and first-class dialogue, abounding with what were to me obviously extraneous (and outrageously stereotypical) characters, was a real chore.  The last third of the book was well-written, focused on the story and revealed its horrific denouement in a sensitive and all-too-believable manner.  The only real surprise was which of two was covering for the other. No, not surprise, discovery.  It could have been either.  Frankly, I didn’t care which.

I was reminded when reading this book of my father’s irritation with female writers.  Sorry, women everywhere, but that was his view.  It was brought about by unnecessary soul-searching and the tendency of the female of the species to delve endlessly into dissecting possible motivations (especially when totally unconnected with the plot).  Some women writers don’t do that at all.  Some should do it an awful lot less.  Just my opinion.  I hated it, will not bother reading more Inspector Lynley mysteries (although they may develop in style), and since Elizabeth George is actually P D James, I won’t be reading any of hers, either.

I found Hercule Poirot’s Christmas when I was searching down some Goodreads lists looking for Christmas books to read and review for you. It’s the only one on my list this year I bought, the rest I already had.  My brother complains that Camilleri is formulaic in his Montalbanos, and Agatha Christie is  certainly formulaic in her country house murders.

We are introduced to the elderly patriarch, his sons and their wives in order.  Also, for our diversion, we are introduced to some extraneous characters and a couple of prodigal children, or sons or daughters thereof.  It’s an enjoyable mix, as one immediately starts to decide who did it, even before the murder takes place.  As usual, I failed to spot the right character, but I did do better than usual at unravelling the key detail glossed over rather early in the story.  I don’t think it’s one of her best, but it was a perfectly acceptable read to accompany a surfeit of Christmas pudding.

The three sleuths are of course, very different, and it’s hard to compare them.  They are who they are, Montalbano the honest but unconventional detective, Lynley a British toff who may turn out better as the series develops, and Poirot the professional amateur, the brilliant mind. Personally I’ll stick with the Sicilian, but I’m sure you have your favourite!

As we head into the new year I’d like to warn you I’m moving this website onto a new provider in the next week. There’ll be a last haiku of the year on Tuesday, then, if all goes well, the address jemimapett.com will take you seamlessly to the new website. If not, you’ll be stuck with the wordpress version with an advert at the end of each post.  Try retyping jemimapett.com if that happens.

Have a happy new year, and I’ll see you on the other side.