I feel a proper Charlie, trying to decide what to post about for Charlie, the third word in the NATO alphabet.

And the only definition for that spelling in my dictionary is: 1 a fool, 2 (in plural) a woman’s breasts!  So that’s why men giggled at Charlie Dimmock , a lovely TV gardening lady well known for being unconfined beneath her teeshirt.  I’m so innocent! 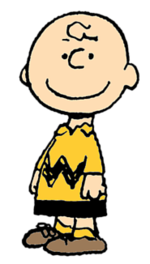 There are plenty of famous people called Charles, but Charlies are slightly rarer, partly because many style themselves Charley.  Charlie Chaplin, Charlie Brown, Charlie Sheen are the ones I recognise among those thrown up by a quick Google search.  Charlie the Unicorn is a YouTube favourite, apparently.  Charlie and the Chocolate Factory (and the Great Glass Elevator) would have made an excellent book for me to review if this had been Saturday.  Hmm, do I prefer Johnny Depp or Gene Wilder as Willie Wonka?  Gene Wilder, but maybe if I’d read the book I’d prefer Mr Depp’s – being creepily like a certain Mr Jackson, I think.

It’s a hard choice, but I think my favourite Charlie is Charlie Brown, by Charles M Schulz.  Thank you Wikipedia for the picture.  You’re a good man, Charlie Brown!