The final post of this year’s A to Z challenge brings me to Zulu. 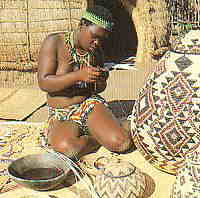 I confess I don’t know much about Zulus.  Like many Brits of my age, I think of the Michael Caine film of that name, which depicts one of the more infamous bits of British history, namely the wars to settle South Africa, and driving the Zulu tribes from their land.  There are around 11 million Zulus in South Africa, according to Wikipedia, the most numerous ethnic group in that country.  There are smaller groups in Zimbabwe, Zambia, Tanzania and Mozambique.  They are one of the Bantu tribes and the majority live in KwaZulu-Natal, RSA.  No doubt because of the nineteenth century wars, they are famed for being ferocious warriors, which I expect is still an important cultural issue.  Fortunately, these days they are fighting in the political sense; Jacob Zuma has been the President of the Republic of South Africa since 2009 (and attracting plenty of controversy).  There’s a very nice site on Zulu culture at www.zulu-culture.co.za

Just to confuse any researcher, if you search for Zulu Nation, you may well come up with an international hip hop awareness group founded by Afrika Bambaataa, rather than reference to the Zulu people.

Well, that’s it.  I’ve been blogging my way through the NATO phonetic alphabet from Alpha to Zulu.  Some of the entries were easy, others, like this one, were harder to handle.  It was all a ploy, really, to bring your attention to my new book Bravo Victor, the sixth in the Princelings of the East series, which is due to launch on Tuesday, although you should be able to add it to your Goodreads list from Friday.  I hope you enjoy it.

Meanwhile, you have until midnight to enter the Giveaway repeated below, and I hope you come back often during the year to enjoy the mix of news, haikus, flash fiction and book reviews that happen here all year round.

Thanks for being part of my A to Z Challenge 2014 – there’ll be a reflections post here on Monday.