Bravo Victor is the sixth in The Princelings of the East series, and stars Victor, keeper of the Inn of the Seventh Happiness, a much-loved character in four of the previous books.

It’s now 2015.  Victor has grown up, but in spite of his ambitions to be a business guru, he’s still running the Inn of the Seventh Happiness in his spare time.  Fate takes a hand when he visits King Fred of Castle Marsh and is whisked off on a mission to help Sundance and his beautiful accomplice unmask a criminal, and investigate why George has not returned home after his visit to a flying festival. He narrates the particulars of his travels in the Rhinelands, and his quandary when he meets a friend from his past – or is it his future?

Lovers of the series will enjoy this latest adventure, and newcomers will be pleased to find a chronology of major events in earlier tales relevant to this book as well as a cast of characters.  It’s a mystery adventure featuring business intrigue and smuggling in a world not quite like ours, suitable for ages 12 and upwards. 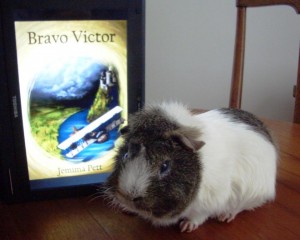 Need another link? Let me know!

Leave a comment here, or on the Princelings website (or both)and receive an entry (or two) to win signed prints of chapter illustration or a colour photo of the cover!