If you haven’t discovered Lindsey Davis’s delightful informer (which is what a private investigator is called in Ancient Rome) Marcus Didius Falco, then you’ve missed a treat.  I’ve read 14 out of the 20 she has written (I gather there’s a Falco companion, too) as well as another non-Falco story, and loved them all.  Now she has gone into the next generation: Falco and Helena’s adopted daughter, Flavia Alba, has gone into the informer business too, even living in the same crummy old place that her father had when he was poor. 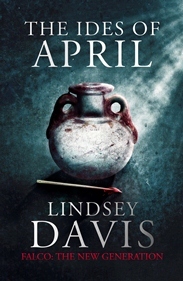 Flavia Alba is very much her own woman, and as you’d expect a spunky one at that.  She has inherited much of the Falco obstinacy and disregard for propriety, which is dangerous in these times, since she is living under the rule of Domitian, a far crueller and more tyrannical (and paranoid) ruler than Vespasian.

Despite all this, Flavia is eking a living, and using a large amount of righteousness to do so.  Her reaction to the unexplained death of a client – which means she has no chance of getting paid for investigations so far – leads her into close proximity with the gamut of officialdom in her quarter of Rome – and into more trouble than she imagined.

It was about chapter 24 when I realised she was probably following the wrong man, and although I was proved right when she realised around chapter 44, there is still plenty of excitement and adventure (and danger) in bringing the miscreant to rights.  Exciting chases, Roman matrons reliving their youth through exotic ritual festivities, vigiles and other law enforcement falling foul of each other (often in a very foul manner), and an excellent twist in the tale kept me glued to the pages.

A delicious and dangerous romp through Roman ordure and officialdom, with added heartache and animal rescues. I’m already looking forward to the next one!

The Ides of April by Lindsey Davis

I bought this with my own money, and read it in the garden in the sunshine – since I couldn’t take it to a beach – it’s my Beach Read giveaway from now till the end of the month.

Series Alert: the second in the series Enemies at Home is due to be published in late October 🙂

Book Review: The Ides of April by Lindsey Davis

6 thoughts on “Book Review: The Ides of April by Lindsey Davis”