This is part of a Blog Tour hosted by I Am A Reader, but I was delighted to get a chance to read and review the fourth book in the Jack Templar, Monster Hunter series anyway.  You can read my review of the third book here, and note this series tends more towards YA than MG. 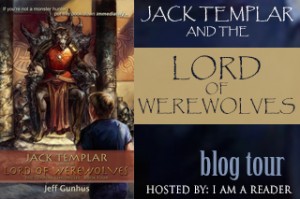 Jack Templar and the Lord of the Werewolves by Jeff Gunhus

Fresh from confronting the Lord of the Vampires in the limestone catacombs beneath Paris, Jack Templar faces his toughest challenge yet as he searches for the next Jerusalem Stone, this one being held by the Lord of the Werewolves.

But the narrow escape from the vampire lair came at a great cost and Eva battles to survive the new vampire blood in her veins. The only chance to help Eva is to continue their quest and find the Jerusalem Stones. Reuniting the Stones will not only stop Ren Lucre’s coming war against mankind, but also transform Eva back into her human self.

From the ruins of ancient Delhi to the depths of the Black Forest in Germany, Jack and his friends face monsters, bewildering riddles and treachery from the most unlikely of places. Through it all, they are plagued by the Oracle’s prediction that at least one of their group with not make it through the adventure alive. Worse yet, they know that Kaeden, the Lord of the Werewolves, will do his best to make sure none of them do.

But they are monster hunters of the Black Guard… and they will do their duty, come what may.

This continues straight on from the third book, and I would advise at least starting there if not at the first in the series.  The choices Jack made in the previous part of his quest have a major impact on this story, and the twists and turns and worries about who can and cannot be trusted are partly bound up in that decision.

The confusion is enhanced by a visit to the oracle at Delphi, who frankly doesn’t help much, except to muddy the waters even more.  She does give Jack and his team (and they are a great team, full of strengths, weaknesses and complementary talents) a few cryptic pointers, though, and he sets off to find the Lord of the Werewolves to continue to gather the necessary talismans to fulfill his doom.

This is a well-paced, riddle-filled episode, and the descriptions of dark and gloomy forests are equally matched by the lighter side of European culture.  Mr Gunhaus is a master of tension, and also a pretty mean hand at describing fights and battles too.  There are plenty of those, but this is more of a psychological battle.  The plot hangs together well, although I had a couple of reservations about the final outcome.

An exciting, nay nerve-wracking gallop through the black forests of central Europe to uncover deep and dark secrets.  I only hope Jack and his friends can make it through to the bitter end – it looks like it’s going to be a difficult journey!

The stench hung heavy in the air. There was no other smell in the world quite like it. First came the stink of grease fires from the wall torches, the heavy black smoke that roiled through the air like a foul fog. Then a moldering, musty base layer came to the senses. It reeked of decay and seeping moisture that grew black mold on every surface. The mold clung on the rough-cut rocks lining the dungeon tunnels. It covered the thick iron bars holding the prisoners in place. It even grew on the tattered rags covering the miserable creatures in the cells and likely on their skin as well. That final smell overlay the symphony of stink.

Jeff Gunhus is the author of the Amazon bestselling supernatural thriller, Night Chill, and the Middle Grade/YA series, The Templar Chronicles. The first book of the series, Jack Templar Monster Hunter, was written in an effort to get his reluctant reader eleven-year old son excited about reading. It worked and a new series was born. His book Reaching Your Reluctant Reader has helped hundreds of parents create avid readers. Killer Within is his second novel for adults. As a father of five, he and his wife Nicole spend most of their time chasing kids and taking advantage of living in the great state of Maryland. In rare moments of quiet, he can be found in the back of the City Dock Cafe in Annapolis working on his next novel. If you see him there, sit down and have a cup of coffee with him. You just might end up in his next novel.

Blog Tour and Book Review: Jack Templar and the Lord of the Werewolves

3 thoughts on “Blog Tour and Book Review: Jack Templar and the Lord of the Werewolves”